Palestinian President Mahmoud Abbas has told the Arab League he will not resume peace talks without an Israeli settlement freeze.

Abbas is under international pressure to resume low-level border talks that began last month. However, his comments in Cairo on Sunday seemed to close the door to further negotiations because Israeli Prime Minister Benjamin Netanyahu has repeatedly rejected a settlement freeze, as well as a demand to accept Israel's pre-1967 war frontier as the basis for a border with a future Palestine.

Abbas said he is sending a letter to Netanyahu with his demands for resuming negotiations. In case of a negative response, Abbas said he will resume the campaign for recognition of a state of Palestine by the UN.

"We will wait for (Israel's) response to the letter, and if it fails to arrive, we will commence our plans related to the Security Council, the General Assembly, and other UN bodies," he said.

A source in Prime Minister Benjamin Netanyahu's office said Abbas' speech before the Arab League indicates that he as "turned his back on peace."

"Instead of entering negotiations that would bring an end to the conflict, Abbas prefers to link to the terror organization Hamas - the same Hamas that embraces Iran," said the source. 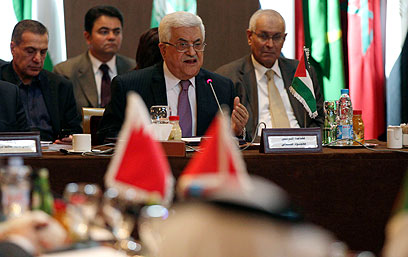 Meanwhile, a rare public rift broke open Sunday in the usually tightly disciplined Islamic movement Hamas over a reconciliation deal that would require it to relinquish key areas of control in the Gaza Strip.

The deal, brokered by Qatar, was signed last week in Doha by Hamas' top leader in exile, Khaled Mashaal, and Abbas – who heads of the rival Fatah party.

The agreement is to end nearly five years of separate governments — Hamas in Gaza and Abbas in the West Bank — by establishing an interim unity government headed by Abbas that would prepare for Palestinian elections.

Senior Hamas figures in Gaza, who stand to lose most from the deal, said it was unacceptable, while top Hamas loyalists in the West Bank defended the agreement.

The argument raised new questions about the ability of Abbas and Mashaal to implement the deal, seen as their best shot yet at healing the rift following Hamas' violent takeover of Gaza in 2007.

Abbas told the Arab League that the main objectives of the unity government are to prepare for Palestinian elections and rehabilitate Gaza.

He said elections may be held in June or July.

Moran Azoulay contributed to the report