Iran has own version of Monday's attacks – Ahmadinejad
Photo: AFP

Israel and its allies are behind Monday's bombing in India and the thwarted terror attack in Georgia, Iranian Foreign Ministry Spokesman Ramin Mehmanparast charged Monday.

In a statement, the spokesman claimed the attacks were the latest phase in the Jewish state's psychological war against Tehran, the IRNA news agency said. He added that Israel targeted its own embassies in a bid to undermine Iran's friendly ties with India and Georgia.

"The Zionist regime has a high record of criminal actions against humanity and it is the first suspect of any terrorist operation in the world,” Mehmanparast said. "Tehran condemns terrorism in strongest terms as Iran has been a victim of terrorism."

Earlier, Iran's ambassador to India dismissed Israeli allegations that Tehran was behind the India and Georgia terror incidents. 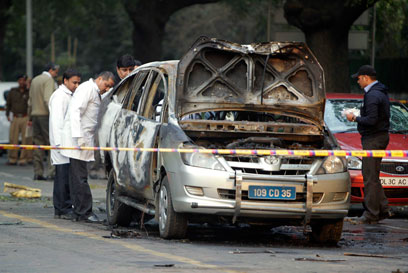 "Any terrorist attack is condemned (by Iran) and we strongly reject the untrue and irresponsible comments by an Israeli official,' Mehdi Nabizadeh was quoted as saying. "These accusations are untrue and sheer lies, like the previous times.'"

An explosion tore through an Israeli diplomat's car in the vicinity of the Israeli Embassy in New Delhi, India, Monday, wounding four people, including the wife of an Israeli Defense Ministry representative and her driver.

An initial probe into the attack revealed that the envoy's wife left the embassy with her driver after a day of work at the mission in order to pick up her children from school. The explosion took place a short while before she arrived at the school, apparently after a bomb was attached to the vehicle.

Earlier, Prime Minister Benjamin Netanyahu accused Iran and Hezbollah of being behind Monday's double terror attack on the Israeli embassies in India and Georgia.