An Iranian man carrying explosives blew off his own legs and wounded four other people in two blasts Tuesday in Bangkok, Thai authorities said.

Security forces found more explosives in the assailant's rented house in the capital, but it was not known what targets they might have been meant for, Police Gen. Pansiri Prapawat said.

Winai said the man was due to board a flight for neighboring Malaysia. He said authorities are interrogating the man, but it is not yet known whether he was involved in Tuesday's blasts.

A police official said that Thai authorities had intelligence indicating that an Iranian national may try to carry out a terror attack in Bangkok.

"We were advised of the possibility of an attack but we did not know where it might occur," said Phrewphan Damapong.

A day earlier, an Israeli diplomatic car was bombed in New Delhi, and Israel blamed Iran for that attack.

Authorities did not immediately say if a link was suspected, but Israeli Foreign Ministry spokesman Yigal Palmor said in Jerusalem, "we can't rule out any possibility."

The Foreign Ministry in Jerusalem said the explosions did not occur near the embassy or the ambassador's home.

Defense Minister Ehud Barak said the attack in Bangkok proves once again that Iran and its proxies are continuing to employ terror. Barak, who is visiting Singapore, said Iran and Hezbollah are "relentless terror elements" and pose a danger to the region and to the world's stability.

One of the blasts in Bangkok damaged a taxi, and a grenade detonated as the assailant carried it down a sidewalk outside a Thai school, said Col. Warawut Taweechaikarn, a senior police officer in the district.

Photos of the wounded Iranian man showed him covered in dark soot on a sidewalk outside the school strewn with broken glass. A dark satchel nearby was investigated by a bomb disposal unit.

Pansiri said a passport found at the scene indicated the man was Saeid Moradi from Iran. Authorities in Tehran could not immediately be reached for comment.

Three Thai men and one Thai woman were brought to Kluaynamthai Hospital for treatment of injuries, Suwinai Busarakamwong, a doctor there, said.

A third blast occurred inside a rented house on the same road, busy with businesses and apartment blocks, but it injured no one. 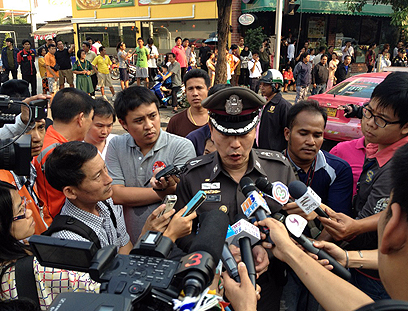 "Last month, a Lebanese-Swedish man with alleged links to pro-Iranian Hezbollah terrorists was detained by Thai police. He led authorities to a warehouse filled with more than 8,800 pounds (4,000 kilograms) of urea fertilizer and several gallons of liquid ammonium nitrate.

Israel and the United States at the time warned their citizens to be alert in the capital, but Thai authorities said Thailand appeared to have been a staging ground but not the target of any attack.

Pansiri said that "so far, we haven't found any links between these two cases."

He said Moradi had been renting the house in Bangkok with two other unidentified foreigners. Immigration police are trying to trace Moradi's movements, but initial reports indicated he had at least traveled to Bangkok from the southern Thai resort town of Phuket on Feb. 8.

Bangkok's blasts came one day after bombs targeted Israeli diplomats in India and Georgia. The attack in India wounded four people, while the device found in Georgia did not explode. Iran has denied it was responsible.

In Jerusalem, Israeli foreign ministry spokesman Yigal Palmor said there was not yet any sign that any targets in Bangkok were Israeli or Jewish.

Thailand has rarely been a target for foreign terrorists, although a domestic Muslim insurgency in the country's south has involved bombings of civilian targets.