Phillip and Dorothy Grossman, ages 95 and 93

Oldest couple, ages 95 and 93, among the Nefesh B'Nefesh olim who made aliyah to Israel earlier this month

A class of 33 eighth grade students from Hebrew University High School (Leyada) in Jerusalem greeted the oldest couple to make aliyah in the history of Israel earlier this month. The Israeli students, aged thirteen to fourteen years old; many with parents or grandparents who happened to have made aliyah, have spent the past two months studying aliyah in a special class project about olim from the early stages of the Yishuv to modern day Israel. The Leyada students, upon arriving to Ben Gurion airport, had the opportunity to greet Phillip and Dorothy Grossman, ages 95 and 93, together with 43 other North American olim who arrived to Israel with Nefesh B'Nefesh in a charter flight.
Coming Home
Moving to Israel at 97
Ofer Petersburg
Maria Bertha Holskon from Argentina becomes one of Israel's oldest new olim – making aliyah at the ripe old age of 97
Moving to Israel at 97
Speaking to the Leyada students, Nefesh B'Nefesh spokesperson Tani Kramer explained that the organization provides a free a flight to those who make aliyah and continues to help the new olim adjust even after they leave the airport. The organization, in cooperation with the Israeli government and the Jewish Agency for Israel, has been able to bring and assist almost 30,000 newcomers from North America and the UK since its founding in 2002. According to Nefesh B'Nefesh, 97 percent of the olim that have made aliyah with the organization have remained in Israel. 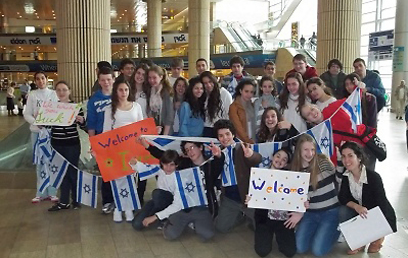 Eighth grade student, Natalie, said that greeting the new North American olim was a very moving experience for her. "It was amazing to see with my own eyes that olim are continuing to come to Israel and make their home here." "I never realized that aliyah is still such a prevalent part of Israel today," added fellow classmate, Shelly.

"The most moving part of the visit was to see the elderly couple (the Grossmans) be greeted by their grandchildren and great-grandchildren. It made me realize that it's never too late to come live in Israel," said eighth grade student Mikey Kalif. "We need many more olim in Israel!" he added.

As the olim entered into the welcome hall of the Ben Gurion International Airport, the Leyada students sang, danced, and greeted them with flags, welcome signs and chocolate they had prepared beforehand.

The students were especially delighted when the elderly Grossmans and the many other olim who passed through, sang along and smiled in response to their warm welcome. "We are so happy they are here, and I hope they will adjust easily," noted Inbar, as she waved Israeli flags with her class. "It makes me feel good to know they are home with us."