January 2010 marked the beginning of what appeared to be a wave of assassinations targeting Iranian nuclear scientists; three such experts were killed at the time. We can assume that after the killing of a fourth scientist, in July 2011, Iran's political leadership decided to put an end to this trend and create counter-deterrence against the main suspect: Israel. Iran's Intelligence Ministry subsequently accelerated its preparations of the deterrence and revenge plan.

Statements made by senior Iranian officials in 2011 indicate that Tehran set its sights on grander targets than random employees at Israel's embassies; that is, "high-quality" targets such as Israeli ambassadors, Israeli security officials, or Israeli delegations overseas.

However, assassinating such top-notch targets requires preparations of at least six months that include surveillance, identification of vulnerabilities, the planning of infiltration and escape routes, the facilitation of communication means, safe houses, contact persons and so on. There are no simple operations when it comes to assassinations in a foreign sovereign state, even if it is a friendly one. 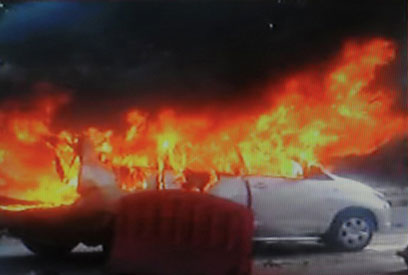 Israeli embassy car targeted in New Delhi (Photo: AFP)
Intelligence experts are still debating whether the elimination of scientists indeed undermines Iran's nuclear project. Operations against well guarded scientists at the heart of Tehran are highly sophisticated and require a long stay in the area in question, while risking human lives and intelligence sources cultivated for years. The argument pertains to the outcome: That is, will assassinations prompt scientists to make every effort to end their nuclear efforts?

The question remains open, yet what's clear is that the Iranian regime is greatly bothered by the wave of assassinations, which portray it as vulnerable and weak. This prompts the conditioned reflex: Start assassinating senior Zionist figures, so we can also showcase photos of bodies and cries of pain on the other side. We can assume that Iran's intelligence services have started to formulate a major operation that will leave an impression not only on the Iranian people and global media, but also on those behind the elimination of Iran's scientists. The natural contractor for such operations is the Revolutionary Guards' al-Quds force, which comprises some 15,000 operatives. It boasts thousands of officers trained in diverse fields such as the formation of sleeper cells worldwide, smuggling operations, explosives, and so on. The al-Quds force assumed greater importance in the eyes of Western spy agencies when it became a major player in securing Iran's military nuclear project. The elite force has another role: It takes part in the effort to purchase nuke-related components in the West and transferring them to Iran. Hence, it won't be a wild guess to assume that the US intelligence community, along with other spy agencies, invests regular efforts in monitoring the al-Quds force. This further limits Iran's freedom to act. So was the latest attack thwarted in Bangkok supposed to be that high-profile operation being prepared by Iranian intelligence officers for months to avenge the killing of Tehran's nuclear scientists? Or was it yet another terror bid in the series of rash attacks – like the ones in Tbilisi and New Delhi earlier this week – carried out on urgent orders to al-Quds cells in order to achieve an immediate effect?

The pressure on Iran grew when a fifth nuclear scientist was assassinated in December of 2011. At that point, Iran's clerics lost their composure and pressed the al-Quds force's operational units to carry out attacks. It was no coincidence that the urgent operations focused on states such as India, Thailand, Azerbaijan and Georgia, where al-Quds boasts local cells that regularly gather intelligence information on Israeli targets such as airlines, embassies, and the offices of large Israeli companies. Indeed, such sites were marked first as initial targets for attack in the latest terror wave. The terrorists were not looking for a senior Israeli figure, but rather, they sought any kind of Israeli target. Thus far, all we saw was a random series of attacks: The Iranians fired in all directions and hoped to hit something. However, make no mistake about it - this was only the first course. The rash operations we saw in recent days hide the real thing: That is, the major revenge-deterrence attack being prepared by the Iranians. For them, this is not only a matter of exacting a price from Israel for the killing of the scientists; rather, it is a matter of national pride and deterrent power in an era of sanctions and threats against Iran Now that the initial terror attacks were carried out, the Iranians will examine the responses: Will anyone else except Israel point the finger at them? Who will condemn them? And what price will they pay? The Iranians will also monitor the actions of global spy agencies and try to identify the lesions drawn by the enemy from the recent incidents.

Iran's intelligence forces are sophisticated, experienced and brutal. They will study the vulnerabilities and continue to plan the grand ambush. Should someone on our side fall asleep and rest on his laurels, he could wake up with a disaster that prompts the kind of trauma produced by the 1992 bombing of Israel's embassy in Buenos Aires.