Engineering Corps officers have spent the past few weeks studying a powerful explosive device placed alongside other charges near the border fence and meant to target an IDF force. The explosives were successfully dismantled.

The device was found to contain unmistakable Iranian trademarks similar to previously intercepted weapons with Revolutionary Guards stamps on them which had made their way to the Gaza Strip.

A military source from the IDF's Gaza Division explained that the army has previously discovered devices it suspects were manufactured in Iran, but that in this case there was no doubt the explosives were Iranian-made. 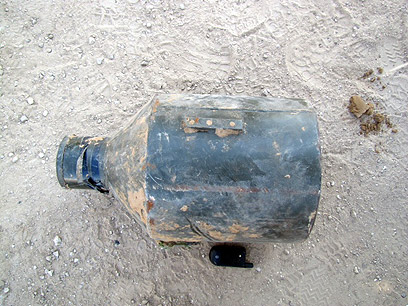 "It's interesting but not surprising to find an Iranian device. Most devices are locally manufactured and few are smuggled in. Another 100 or 200 foreign devices will not change the picture," the source said.

The past year has seen in drop in the amount of explosives uncovered by the army in Gaza with an average of 50 explosive fields detected a year. The majority of the devices did not detonate and were discovered by scouts and Engineering Corps combatants and with the help of the Military Intelligence Directorate.

The devices are usually dismantled by a robot unless there is fear it will detonate, in which case snipers or tanks handle the matter. "The device is the least important part in an explosives field. What is more important is how the devices are placed, disguised and activated."