A team of Israeli scientists has been able to crack the code to mammals' longevity: The team, led by by Dr. Haim Cohen, of Bar-Ilan University's Mina and Everard Goodman Faculty of Life Sciences, has discovered a gene that promotes longer life in mammals.

The team includes researchers from Hadassah Medical Center, the Hebrew University and Carnegie Mellon University, the discovery of the gene – in mice – increases the likelihood that similar activity can be found in a human gene.
1st Sight
Israeli scientists develop 'virtual cane'
Shai Zamir
Hebrew University unveils innovation which could significantly improve orientation, mobility of sight-impaired people
Israeli scientists develop 'virtual cane'
According to a Bar Ilan press release, researchers are focusing on a group of genes, known as Sirtuins, which can be found in every species developed over the course of evolution and are, in one way or another, found in single-celled organisms, such as yeast, and in complex organisms, such as humans. The most highly researched gene in this group is SIR2 (Sirtuin 2) which has been found to prolong life in yeast, worms and flies. Research of the SIR2 gene in mammals yielded a set of seven genes – Sirtuins 1-7 or SIRT 1-7 – each of which works in key reactions in the process of life.

Dr. Cohen's team examined gene number 6 from the Sirtuin group (SIRT6) in mice. He used two groups of mice. In one group SIRT6 was removed from the mice and in the second group he created an over-expression of the gene in mice. 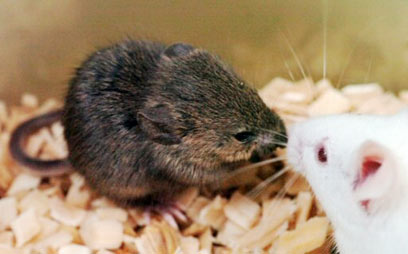 Tested on mice in the lab (Photo: AP)
"Originally in mice without the gene, researchers saw premature aging," says Cohen. "They suffered spinal curvature, calcium deficiency and osteoporosis, immune system problems, and diabetes – conditions which are familiar to us in aging humans. We called the second group, which we created in the laboratory, the 'MOSES' mice (an acronym for mice over-expressing exogenous SIRT6), and compared their lifespan to that of wild-type mice, which possess a normal amount of SIRT6." Cohen and his team fed two groups of wild-type and MOSES mice a high-fat diet containing 60% more fat calories than average. The wild mice developed the diseases associated with aging, while the MOSES mice remained healthy. MOSES bodies contained 30% less fat, about 40% fewer triglycerides (which increase cholesterol) and 30% less diabetes compared to the MOSES mice. Concerning lifespan, wild strain female mice usually live longer than males. In the tests conducted by Cohen on 250 wild and MOSES mice, they found that with normal diet the MOSES male mice lived 15% longer than the male wild species. However, among the MOSES females, no change was recorded. What, then, gives the females a longer life expectancy?

"We found that the rise in life expectancy among males is based on the calorie restriction known to us as a basic mechanism of life extension. There is overlap between these pathways, and the SIRT6 gene is involved in it. Females from the very beginning have a longer life expectancy than males because the basic mechanism is already active, so the engineered males just catch up to females," concludes Cohen.

"In the current study, published today, we've made a huge evolutionary leap in the transition from yeast cells to mice. We were the first to show that these sirtuin genes regulate life span in mammals. "The research was conducted in laboratory animals under very sterile conditions. Is this what happens in nature? It's not clear. The human SIRT6 gene is very similar to that in mice. It could be that drugs designed to activate the gene will have a positive impact on our ability to treat age-related diseases whose frequency increases in the elderly and in the physiological damage caused by obesity."