Ynetnews special: Why is Israeli government covering up Muslim effort to erase any trace of Jewish history on Temple Mount? Archeology expert: Excavations barbaric, a crime

Ira Pasternack couldn't believe his eyes. The tractor's huge blade was lifted high up and then brought down with great force, shattering the ancient floors on Temple Mount. The large clods of earth exposed by the work were cast aside by the mustachioed driver. Yet even an amateur archeologist could spot the priceless remnants of Jewish, Christian and Muslim history being cast away.

A few hours earlier, on a steaming July day in 2007, Pasternack was sent to Temple Mount in his role as an Israel Antiquities Authority inspector, in order to supervise excavation works at the holy site, which in the past boasted two Jewish Temples. This marked the first such project at the site since the 1967 Six-Day War, as the area's sensitivity could prompt a political and diplomatic flare-up, thereby discouraging any such work.

According to specific Antiquities Authority instructions, any digging at the site was not allowed to exceed 60 centimeters (roughly two feet) and was not to be undertaken using mechanical equipment. However, reports drafted by Pasternnack and other sources, exposed for the first time by Yedioth Ahronoth Friday, indicate that workers largely ignored the instructions. Much of the work was done using a tractor, continued during the night with the help of a flashlight, reached deeper than the permit allowed for. Moreover, the clods of earth removed from the site, which apparently comprised valuable remnants from the two Jewish Temples, were thrown away to an improvised garbage dump by members of the Waqf (the administrative Muslim body in charge of Temple Mount.) 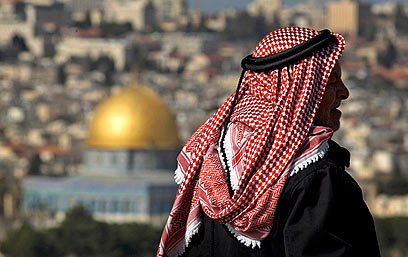 Archeology expert Dr. Gabai Barkai, a world-renowned expert on Temple era excavations, was shocked by the reported work: "How could one dig up such sensitive area at night? How could one dig using mechanical equipment? Every such move is a crime. This is first-rate barbarity."

Why is report secret?

An investigative report by Yedioth Ahronoth revealed the ongoing failure of various Israeli authorities in safeguarding the rare archeological treasures found on Temple Mount. Information elicited by the newspaper showed that the Waqf is consistently erasing any trace of Jewish history at the site. Mideastern affairs expert Dr. Mordechai Kedar says these acts are undertaken in the framework of an Arab practice known as "erasing the signs," aimed at eliminating the remnants of any civilization that preceded Islam. Members of the State Comptroller's Office launched an investigation into the affair four years ago and drafted a report about it. However, the Knesset's State Control Committee decided to impose a gag order on the report for "security reasons." However, Israeli intelligence officials told Yedioth Ahronoth there is no reason to prevent the report's publication. A senior Shin Bet Security Service official said following the Committee's session on the matter: "I'm ashamed. This is akin to cheapening national security to the lowest point possible." Former Mossad Chief Meir Dagan has also questioned the gag order. "There is no connection whatsoever between the failure to publish the report and national security. As far as I know, both Mossad and Shin Bet said there is no reason not to publish the report…apparently there are other considerations here, pertaining to political motives." Conversations and interviews held with dozens of officials involved in drafting the State Comptroller's secret report indicate that Prime Minister Benjamin Netanyahu is among the senior officials interested in shelving the document. Attorney Yisrael Caspi, who represents a group fighting the destruction on Temple Mount, says the PM is unequivocally responsible for the ongoing failure. 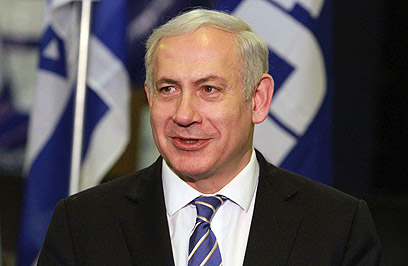 Is PM Netanyahu burying report? (Photo: Ido Erez)
"One cannot underestimate the prime minister's responsibility for the state of affairs on Temple Mount; one can only refer to it as absolute responsibility," he said. "We know with certainty that nothing happens on Temple Mount without the advance knowledge and permission of the Prime Minister's Office and its head. All the criticism, all the negligence, all the failures, the entire cover-up and the helplessness in dealing with the matter - and therefore all the historical responsibility - are his." Caspi says Netanyahu does not want to be reminded of the "historical scandal" of handing over the holy site known in Judaism as Solomon's Stables to the Waqf during the PM's first term in office, in the 1990s. "This turned Solomon's Stables, an amazing archeological site…into a place that Jews are not allowed to enter and into the largest mosque in the State of Israel," he says. "These days too, three tractors are being used on Temple Mount," Caspi says. "Construction materials are also continuing to be brought into Temple Mount in violation of police pledges…Temple Mount looks today like a construction materials' warehouse…materials being brought in today will be used for illegal works tomorrow." In another disturbing case, a ministerial committee approved the use of two giant generators on Temple Mount. "At times you're just stunned by the lack of wisdom in our conduct on Temple Mount," Attorney Caspi says. "You can't believe these things are happening. We are playing into our enemies' hands and shooting ourselves in the foot, because these generators can provide enough electricity for half the city. Why are they needed?" "Now, there is a regular supply of electricity to Temple Mount. The State of Israel has no interest whatsoever in allowing the Muslims the possibility to riot and barricade themselves there."

After the opening of the Western Wall Tunnels in 1996 and the subsequent riots at the site, then-PM Netanyahu agreed to unilateral Waqf steps in the area. The Waqf almost immediately embarked on excavation work, and two months after the tunnels were opened the Islamic body inaugurated the largest mosque in Israel at the large space associated with Solomon's stables, thereby banning Jews from entering the site. Two years later, the Waqf inaugurated another mosque, this time below the al-Aqsa Mosque nearby. As part of the work, the Waqf cleared great amounts of soil from the area, built a new floor and installed new pipes, while drilling into ancient stones. Moreover, Waqf members painted over rare Jewish works at the site. All this work was undertaken without Israeli supervision, and one can only imagine the kinds of cultural, historical and religious treasures lost in the process. 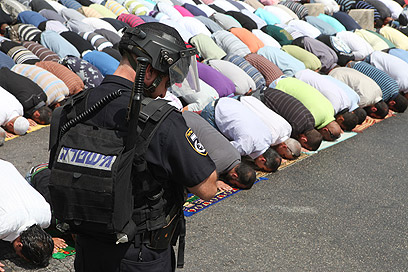 Muslims pray on Mount (Photo: Ohad Zoigenberg)
In 1999, the Waqf went a step further and dug a hole in the Temple Mount plaza, arguing that it needed to build an emergency exit for the mosque. The work was done by tractors, with some 250 trucks removing about 12,000 tons of soil replete with archeological findings from the site. The soil was dumped at a city garbage dump and also near the Kidron River. Archeologists Gabi Barkai and Zachi Zweig are now sifting through the latter pile as part of a special project, and have already discovered priceless findings attesting to the administrative work undertaken in the first Temple. The archeologists also found decorated utensils from the King Solomon era, as well as coins and clay dating back to the second Temple. Hundreds of artifacts have already been put on show for the benefit of the general public. Dr. Eilat Mazar, a senior fellow at the Shalem Center's Jewish archeology Institute, witnessed the digging at the Temple Mount plaza in 1999. "For me as an archeologist it was a shock; it was like performing heart surgery with a hoe. The Waqf's objective is to not only turn Temple Mount into a holy compound, but to turn it into a 'built up Aqsa' for Muslims only," she says. "One need not be an archeologist to understand there's destruction here." The Prime Minister's Office issued the following response to the story: "As opposed to the claims, the body that imposed a gag order on the (State Comptroller's) report was not the government, but rather, the sub-committee of the Knesset's Defense and Foreign Affair's Committee…any argument alleging that the report is not being published as result of irrelevant reasons is baseless and disconnected from reality." The Waqf issued the following response: "The Waqf's management was sorry to hear the claims made in the story pertaining to the Waqf's policy on Temple Mount. In the Waqf management's view, all these claims are baseless and constitute false charges. Our official policy is to preserve and respect any human heritage. You are invited to visit the mosque and see for yourself well preserved Roman, Byzantine and Crusader artifacts, among other items."

The full story was published by Yedioth Ahronoth on Friday