Arab-Israelis back Assad: Hundreds of Israeli Arabs and Golan Heights Druze took part Saturday in a conference of solidarity with the Syrian government held in a Haifa theater.

Participants in the event claimed that the state of affairs in Syria is in fact a conspiracy led by the United States, Israel and Arab states. The conference was organized by the Popular Committee for Syria's Victory.

Knesset Member Issam Makhoul, who also took part in the conference, told Ynet: "The event was held in order to reject the conspiracy taking shape against Syria, with the US leading this move along with Qatar and Saudi Arabia. They wish to sow terror within Syria and hold the regime accountable."

Addressing a recent conference in Tunisia organized by Assad opponents, Makhoul said the event was the work of "enemies of the Syrian people." 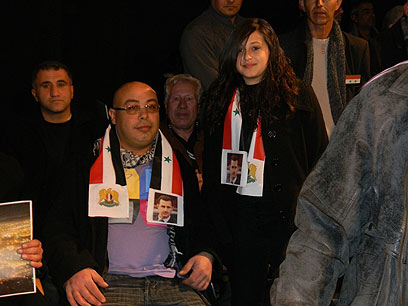 "I support a deep reform in Syria and the building of an alternative for dialogue, rather than being dragged into war," he said. "The State of Israel is an important player in this state of affairs and continues to support the bloodshed in Syria."

Another participant told Ynet: "The Syrian regime is not responsible for the killing. There is another state that pours weapons into Syria in the aims of killing people and inciting citizens against the regime. This is a disgusting game that supports the interests of the State of Israel, which takes pleasure in seeing the slaughter."

"The whole world needs to understand that the Syrian regime can't be killing its own people," he said.