Foer and Englander collaborate on Haggadah

Famous Jewish authors work together on 'New American Haggadah' - a revisited edition of Passover narrative. 'It's a wonderful conversation to have, a never-ending conversation,' Foer says

Authors Jonathan Safran Foer and Nathan Englander, seated together at a Brooklyn diner, would like to continue a discussion that has lasted for centuries.

They have collaborated on a text dating to Biblical times and revisited each year by millions of Jews worldwide. "New American Haggadah," just published by Little, Brown and Company, is a new edition of the Passover narrative that has been edited by Foer and translated by Englander.

They are a contrast - the earnest Foer and the expansive Englander - but they share skepticism about organized religion and anxiousness about what it means to be a Jew. Both have included Jewish themes in their fiction, whether the grandson of a Holocaust survivor seeking answers about the past in Foer's "Everything Is Illuminated" or the tug of war between religious and secular culture in Englander's "For the Relief of Unbearable Urges."

Foer, inspired by Seders (the traditional Passover gatherings) he has attended, says he thought of the project about six years ago.

"My family gathers every year and I always look forward to the Seders, but they always seem unfulfilled, despite my father's best efforts. He's the kind of guy who cobbles together every page from every single Haggadah. But the conversation is never as interesting as it should be," says the 35-year-old author, whose novel "Extremely Loud & Incredibly Close" was the basis for the Oscar-nominated movie.

"It requires a good users' manual, a guiding hand. The entire point is to transmit values through a story and it's impossible to do that if people aren't engaged in a story and impossible if it isn't in a language that moves them and doesn't have commentaries that engage them." 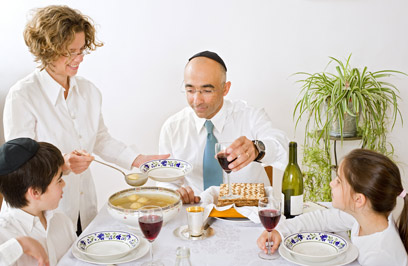 A Haggadah includes special instructions, prayers, hymns and commentary unique to Passover. The books are given out to family and friends at the Seder table so all can participate in the retelling of Moses' deliverance of the Jews from slavery more than 3,000 years ago.

"Like all Haggadot before it, this one hopes to be replaced," reads the introduction to the "New American Haggadah." During their recent interview, Englander and Foer not only acknowledged, but also celebrated the thousands of Haggadot published over the centuries, including feminist Haggadot, Haggadot for Christians, a "traditional egalitarian" Haggadah, a "freedom" Haggadah and a "significant contemporary version" by the novelist and poet Marge Piercy.

"It's a wonderful conversation to have, a never-ending conversation," Foer says of the Passover story.

"New American Haggadah," so titled to honor a tradition of naming Haggadot after the place they were compiled, features a timeline of Jewish history and ongoing commentary from four writers, among them "Lemony Snicket" (the pen name for best-selling author Daniel Handler). The Haggadah is illustrated by the Israeli artist and calligrapher Oded Ezer.

'Don't rejoice over punishment of Egyptians'

Commentaries are listed as "Playground," practical and humorous wisdom from Snicket/Handler; "Library," a literary/psychological perspective from Rebecca Newberger Goldstein; "Nation," political observations by Jeffrey Goldberg; and "House of Study," philosophical and religious takes by Nathaniel Deutsch. Joining past to present is their commitment. As the four consider, for instance, the plagues God brought down on the Egyptians, they raise timeless questions about justice and mercy and whether every citizen should suffer for a nation's crimes.

"And don't we sometimes behave today as the God of Exodus behaved?" Goldberg writes. "Don't we sometimes impose sanctions on dictatorships and by doing so cause hardship for the guiltless? Haven't we made heroes of men who have deliberately taken the lives of thousands of innocents?" Adds Goldstein: Jews "must not rejoice over the punishment of the Egyptians. It is not a moment for singing."

The new Haggadah is a product of love, and of sweat. Englander, who has called himself a "God-fearing atheist," expected to finish a translation within weeks. But he found himself awed by the original Hebrew and he dedicated himself to a faithful edition, one that took three years and was worked on, "head to head, word by word with a study partner," a "hevruta."

"It's such a deeply beautiful text," says Englander, whose story collection "What We Talk About When We Talk About Anne Frank" was recently published. "I'm not religious, but it's really close to my heart. You should read it and weep, it's that beautiful and that stunning and that moving."