WASHINGTON - President Shimon Peres told the AIPAC Conference in Washington Sunday that Iran "must be stopped, and it will be stopped."

The president said Iran aims to control the Middle East, thereby controlling a major part of the global economy. He called the Iranian government an "evil, cruel, morally corrupt regime" based on destruction, adding that it is "an affront to human dignity."

"President Obama is leading and implementing, an international complex and decisive policy, imposing economic and political sanctions against Iran. President Obama made it clear that the US will not permit Iran to become nuclear. That containment is not a sustainable policy, all options are on the table.

"The United States and Israel share the same goal - to prevent Iran from developing a nuclear weapon . There is NO space between us. Our message is clear: Iran will not develop a nuclear weapon. 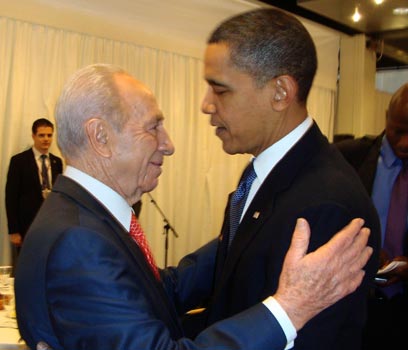 "The restoration of Jewish statehood after two thousand years in exile - is a historic miracle," Peres continued.

"We started as a doubt and wound up as a certainty. We had to fight six wars in six decades. We did not lose one. We never will.

"We can not afford it.We had to defend ourselves. Self-defense is our right and obligation," he added.

"Israel’s high-tech and innovation enriches the world its agriculture makes deserts green. Israel built new villages, new cities, new universities, new theatres and cultural centers. Our children are speaking the language of the prophets. Hebrew literature is flourishing. From a dispersed people we became a united democracy," he said.

Addressing the situation in the Middle East, Peres said it is undergoing its "greatest storm. With horrible bloodshed in Syria, where a tyrant is killing his people, killing children. I admire the courage of the Syrian people. We wish them peace and freedom. In spite of the storm, we have to reach out to the young generation in the Arab world, to those who strive for freedom, democracy and peace.

"The Palestinians are our neighbors for life. Peace can and must be achieved. A peace based on a two state solution," he said.