Obama: US will always have Israel's back

WASHINGTON - President Barack Obama assured Israel's visiting leader Monday that the United States "will always have Israel's back," in a display of unity between allies who often disagree. He said the US and Israel agree that diplomacy is the best way to resolve the crisis over potential Iranian nuclear weapons.

"Both the prime minister and I prefer to solve this diplomatically," Obama said as he and Israeli Prime Minister Benjamin Netanyahu began several hours of White House consultations. The US will consider all options in confronting what it sees as the unacceptable outcome of an Iranian bomb, Obama said.

"My personal commitment - a commitment that is consistent with the history of other occupants of this Oval Office - our commitment to the security of Israel is rock solid. And as I've said to the prime minister in every single one of our meetings, the United States will always have Israel's back when it comes to Israel's security. This is a bond that is based not only on our mutual security interests and economic interests, but is also based on common values and the incredible people-to-people contacts that we have between our two countries," the American leader told reporters ahead of the consultations.

"Obviously a large topic of conversation will be Iran, which I devoted a lot of time to in my speech to AIPAC yesterday, and I know that the prime minister has been focused on for a long period of time. Let me just reiterate a couple of points on that.

"Number one, we all know that it's unacceptable from Israel's perspective to have a country with a nuclear weapon that has called for the destruction of Israel. But as I emphasized yesterday, it is profoundly in the United States' interest as well to prevent Iran from obtaining a nuclear weapon. We do not want to see a nuclear arms race in one of the most volatile regions in the world. We do not want the possibility of a nuclear weapon falling into the hands of terrorists. And we do not want a regime that has been a state sponsor of terrorism being able to feel that it can act even more aggressively or with impunity as a consequence of its nuclear power," he said.

"That's why we have worked so diligently to set up the most crippling sanctions ever with respect to Iran. We do believe that there is still a window that allows for a diplomatic resolution to this issue, but ultimately the Iranians' regime has to make a decision to move in that direction, a decision that they have not made thus far."

The US president added: "As I emphasized, even as we will continue on the diplomatic front, we will continue to tighten pressure when it comes to sanctions, I reserve all options, and my policy here is not going to be one of containment. My policy is prevention of Iran obtaining nuclear weapons. And as I indicated yesterday in my speech, when I say all options are at the table, I mean it. Having said that, I know that both the prime minister and I prefer to resolve this diplomatically. We understand the costs of any military action." 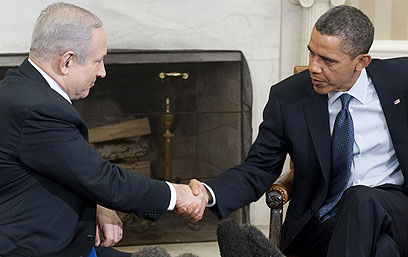 Netanyahu, on his part, said, "Israel and America stand together," and added that Israel is a sovereign nation with the right to defend itself, a pointed reference to the main question hanging over Monday's high-stakes meeting: Whether to try to stop an Iranian bomb by with a military attack in the next several months.

Israel must remain "the master of its fate," the Israeli premier said.

"Americans know that Israel and the United States share common values, that we defend common interests, that we face common enemies. Iran's leaders know that, too. For them, you're the Great Satan, we're the Little Satan. For them, we are you and you're us," he stated.

Netanyahu added: "I think that above and beyond that are two principles, longstanding principles of American policy that you reiterated yesterday in your speech -- that Israel must have the ability always to defend itself by itself against any threat; and that when it comes to Israel's security, Israel has the right, the sovereign right to make its own decisions. I believe that's why you appreciate, Mr. President, that Israel must reserve the right to defend itself.

"And after all, that's the very purpose of the Jewish state - to restore to the Jewish people control over our destiny. And that's why my supreme responsibility as prime minister of Israel is to ensure that Israel remains the master of its fate," he said.

The New York Times said the mood in the Oval Office was "somber and businesslike, as it usually is in meetings between Mr. Obama and Mr. Netanyahu — two men who have had a sometimes fractious relationship over Middle East diplomacy."

Obama will try to persuade Netanyahu to slow quickening pressure among many in his hawkish government to attack Iran's disputed nuclear development sites. Obama is trying to avert an Israeli strike that could come this spring, and which the United States sees as dangerously premature. The president is expected to tell Netanyahu in private at the White House that although the US is committed to Israel's security it does not want to be dragged into another war. Obama is unlikely to spell out US "red lines" that would trigger a military response, despite Israeli pressure to do so.

Obama previewed the White House meeting with a speech Sunday to American supporters of Israel, a key constituency in this election year.

Obama said he does not want war but insists he would attack Iran if that was the only option left to stop that nation from getting a nuclear weapon. US officials believe that while Tehran has the capability to build a nuclear weapon, it has not yet decided to do so. They want to give sanctions time to pressure Iran to give up any military nuclear ambitions. Israel says the threat is too great to wait and many officials there are advocating a pre-emptive strike.

Obama did not directly call on Israel to stand down, and made a point of saying Israel should always have the right to defend itself as it sees fit.

That was the part of Obama's speech to the American Israel Public Affairs Committee that Netanyahu said he liked best. Speaking to reporters in Canada ahead of his arrival in the US, Netanyahu made no reference to the sanctions and diplomacy Obama emphasized.

Obama is unlikely to persuade Netanyahu that economic sanctions and diplomacy are enough to prevent Iran from getting a nuclear weapon, and he is unlikely to win any new concessions from Netanyahu on peace talks, the issue that drew bad blood between the two men in previous meetings and led the Israeli leader to publicly scold Obama last year.

Netanyahu has not publicly backed a military strike, but his government spurned arguments from top US national security leaders that a preemptive attack would fail.

"Now is not the time for bluster," Obama said. "Now is the time to let our increased pressure sink in."

Israeli President Shimon Peres, who had a meeting with Obama Sunday, said he "came out with the feeling that the man is determined to prevent Iran from attaining nuclear weapons."

Netanyahu was more subdued in reacting to Obama's comments Sunday, saying, "More than everything, I value his statement that Israel must be able to protect itself from all threats."

Obama framed military force as a last resort, not the next option at a time when sanctions are squeezing Iran. He said just the talk of war has driven up the price of oil to the benefit of Iran.

Although Israel says it hasn't decided whether to strike, it has signaled readiness to do so within the next several months. The top US military officer recently called a unilateral strike "imprudent," a mild catchall for the chain-reaction of oil price hikes, Iranian retaliation, terror strikes and a possible wider Mideast war that US officials fear could flow from an Israeli strike.

Israel says a nuclear-armed Iran would be a threat to its existence. It cites Iranian leaders' repeated calls for Israel's destruction, support for anti-Israel militant groups and its arsenal of ballistic missiles that are already capable of striking Israel. Israel also fears a nuclear Iran would touch off an atomic weapons race in a region hostile to Israel's existence.

At the core was his assertion that the United States will never settle for containing a nuclear-armed Iran or fail to defend Israel.

The head of the UN nuclear agency said Monday his organization has "serious concerns" that Iran may be hiding secret atomic weapons work, as he acknowledged failure in his latest attempt to probe such suspicions and listed recent atomic advances by Iran.