Netanyahu at AIPAC: A nuclear Iran must be stopped

PM addresses AIPAC's DC conference, thanks Obama, US for steadfast support of Israel, warns against perils of nuclear Iran and vows: When it comes to Israel's survival we must always remain masters of our fate

"Jerusalem is the eternal united capital of Israel," he began his speech to roaring applause. "Israel must always reserve the right to defense itself."

"I want to ask the supporters of Israel here to stand up and applaud the Congress for standing up and supporting Israel. Democrats and Republicans alike, I salute your commitment to the State of Israel," he said.

Netanyahu was quick to focus on the nuclear threat posed by Iran: "Every day, I open a newspaper and read about deadlines and red lines, about what Israel might do and will do – but I won't talk about that. I will never talk about that. As the prime minister of Israel, I will not gamble with its security."

"I want to explain about the dangers of Iran, and why Iran should never be allowed to develop nuclear weapons," Netanyahu continued. 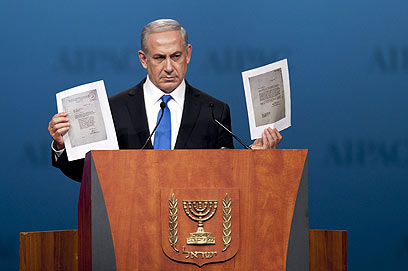 Netanyahu in AIPAC. 'If it looks like a duck..' (Photo: EPA)

"Israel has patiently waited for the international community to resolve this issue. We've waited for

diplomacy to work, we've waited for sanctions to work. None of us can afford to wait much longer," he said.

"A nuclear-armed Iran," he warned, "Will embolden its proxies, like Hezbollah, to attack Israel and US targets. And they will. They'll be doing so backed by a nuclear regime. A nuclear-armed Iran could choke the world's oil supplies. It could blackmail the world on oil."

"The Jewish state will not allow those who seek our annihilation to develop such weapons. A nuclear Iran must be stopped," Netanyahu stated. "When it comes to Israel's survival we must always remain masters of our fate." 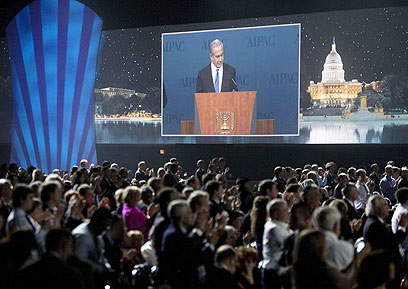 PM says Israel 'must always remain master of its fate' (Photo: Reuters)
During his meeting with the American president earlier Monday, Netanyahu reportedly stressed that Israel has yet to reach a decision regarding a possible strike on Iran's nuclear facilities.

Speaking with reports after the meeting, Netanyahu said that "the Israeli position was met with understanding."

Obama addressed the AIPAC conference on Sunday and reiterated the United States' commitment to Israel's defense and security, as well as its resolve to stop Iran from achieving nuclear weapons.

"Iran's leaders should know that I do not have a policy of containment; I have a policy to prevent Iran from obtaining a nuclear weapon. And as I’ve made clear time and again during the course of my presidency, I will not hesitate to use force when it is necessary to defend the United States and its interests," Obama declared.