US defense secretary, army chief Dempsey summoned to Senate Armed Services Committee to discuss possibility of military intervention in Syria. Panetta says, 'For us to act unilaterally would be a mistake. McCain: In past situations, America has led

WASHINGTON - The top US military leader said Wednesday that US armed forces would be ready if called upon to get involved in Syria, but he raised serious concerns about outside extremists and the fate of Syria's chemical and biological weapons.

UN: Up to 2,000 flee Syria violence into Lebanon 'Assad's mother fears he'll end up like Gaddafi'

Testifying before the Senate Armed Services Committee, Army Gen. Martin Dempsey and Defense Secretary Leon Panetta offered a cautionary note to the call by the panel's top Republican, Sen. John McCain, to launch US airstrikes against President Bashar Assad's regime to end the crackdown on the Syrian people. The United Nations estimates that more than 7,500 people have been killed in Syria and the death toll is more than 100 a day.

"We are reviewing all possible additional steps that can be taken with our international partners to support efforts to protect the Syrian people, end the violence, and ensure regional stability, including potential military options if necessary,” Panetta said.

“Although we will not rule out any future course of action, currently the administration is focusing on diplomatic and political approaches rather than a military intervention.” 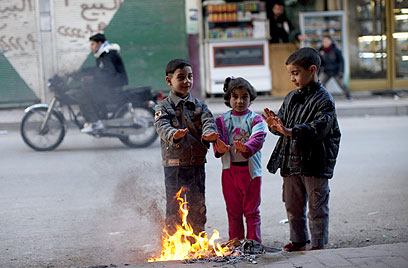 "What doesn't make sense is to take unilateral action right now," Panetta told the Committee. I've got to make very sure we know what the mission is … achieving that mission at what price."

McCain of Arizona, said the bloodshed in Syria calls for US leadership that a Democratic president, Bill Clinton, displayed during the Bosnian war in the 1990s and that Obama eventually showed on Libya last year.

The defense secretary claimed the uprising in Syria was isolating Iran and hinders the Islamic Republic's continued efforts to support terror groups that threaten Israel and regional stability. According to Panetta, even Hamas has distanced itself from Bashar Assad's regime, and Iran is quickly becoming embattled Syrian President Bashar Assad's only supporter in the Mideast.

Obama has resisted calls to step into the turmoil in Syria to stop Assad's crackdown on protesters. He told a news conference Tuesday that the international community has not been able to muster a campaign against Syria like the one in Libya that ousted Moammar Gaddafi last year.

"For us to take military action unilaterally, as some have suggested, or to think that somehow there is some simple solution, I think is a mistake," Obama said. "What happened in Libya was we mobilized the international community, had a UN Security Council mandate, had the full cooperation of the region, Arab states, and we knew that we could execute very effectively in a relatively short period of time. This is a much more complicated situation."

Obama's strategy has been to use sanctions and international diplomatic isolation to pressure Assad into handing over power.

The Pentagon chief said the United States is currently focused on isolating the Assad regime diplomatically and politically, arguing that it has lost all legitimacy for killing its own people. He left open the possibility of military action, saying the Obama administration continues to assess the situation and would adjust its strategy as necessary.

Dempsey said among the military options are enforcement of a no-fly zone and humanitarian relief. He said a long-term, sustained air campaign would pose a challenge because Syria's air defenses are five times more sophisticated than Libya's. "We also need to be alert to extremists, who may return to well-trod ratlines running through Damascus, and other hostile actors, including Iran, which has been exploiting the situation and expanding its support to the regime," Dempsey said. "And we need to be especially alert to the fate of Syria's chemical and biological weapons. They need to stay exactly where they are." McCain, along with Sens. Lindsey Graham, a Republican, and Joe Lieberman, an independent, have called for US military involvement.

Committee Chairman Carl Levin, a Democrat, said there is no consensus on how to get Assad to leave.