Gantz: IDF will continue to retaliate to rocket fire

Several people suffered anxiety attacks on Sunday after parts of a rocket intercepted by the Iron Dome system hit a car and a water pipe in Beersheba. More than 30 rockets were fired at Israel on Sunday.

At around 3 pm a rocket landed in one of Beersheba's residential neighborhoods, causing damage to 15 homes. A short while later another rocket hit near an empty school in the city. There were no reports of injury, but the structure was damaged.

"It's frightening to think what the outcome might have been had children been present at the school. The school's wall looked as though it was full of bullet holes," a passerby told Ynet.

The school remained closed due to the ongoing rocket attacks on Israel's southern region. 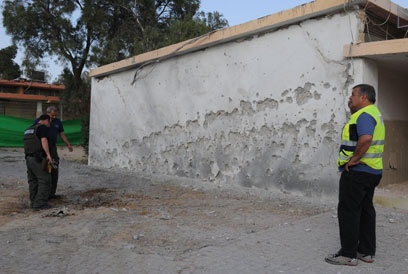 Earlier, two rockets exploded in open areas near Ofakim, another in Ashdod and another in Gan Yavne. One of the Grads was intercepted and its residues landed in a local resident's backyard. Damage was caused to a hen-house in the Ashkelon area. An additional Qassam rocket and mortar shell hit open areas at the Eshkol Regional Council. No injuries or damage were reported.

Meanwhile, the IDF continued efforts to stop the rocket fire. The IDF Spokesperson's Unit said that an Air Force jet hit a terrorist who was preparing to fire a rocket at Ashdod. The IDF said that the same terrorist had fired a rocket at the city earlier on Sunday.

IDF Chief of Staff Benny Gantz said Sunday that more than 120 rockets were fired at Israel since Friday. He noted that 20% of the rockets were intercepted by the Iron Dome system. "The IDF has demonstrated accurate interception abilities," he said.

"The IDF has retaliated and will continue to retaliate with force and sensitivity against any firing directed at Israel. Hamas and other terror groups continue to gain strength at an alarming rate. We do not seek escalation but Hamas controls Gaza. " The Defense Ministry said in a statement that 16 terrorists were killed and 20 others were wounded in the current cycle of violence. The statement also noted that a 14-year-old teen from the Gaza Strip who was not involved in the fighting was also killed.

Since Friday, the IDF has carried 21 strikes in Gaza, including 13 airstrikes meant to thwart rocket launching attempts and eight attacks against weapons, factories and depots.