On a visit to Beijing, former UN chief and UN-Arab League envoy to Syria Kofi Annan told Chinese Premier Wen Jiabao that global cooperation with China and other countries was the only way to defuse the conflict, whose sectarian dimensions have raised fear it could spread and destabilize the wider region.

"I indicated that I had received a response from the Syrian government and will be making it public today, which is positive, and we hope to work with them to translate it into action," Annan told reporters after meeting Wen.

Annan's spokesman confirmed the Damascus had accepted the six-point peace plan, which the UN Security Council has endorsed and Annan called an "important initial step".

Annan said it dealt with "political discussions, withdrawal of heavy weapons and troops from population centers, humanitarian assistance being allowed in unimpeded, release of prisoners, freedom of movement and access for journalists to go in and out.

"We've had very good discussions about the situation in Syria and they (China) have offered their full support," he said. "They're going to work with me and the other members of the Council to ensure that the six-point plan is implemented.

"So we will need to see how we move ahead and implement this agreement that they have accepted," said Annan.

The former UN secretary general, who flew to China from Russia, was trying to persuade President Bashar Assad's two most powerful allies to help advance his proposal which, crucially, does not insist on Assad stepping down right now - unlike previous plans which Moscow and Beijing vetoed at the Security Council. Arab leaders were expected to endorse it later this week at a Baghdad summit.

Annan appealed for Beijing's support and advice, according to a pool report. "And I know you've already been helpful but this is going to be a long difficult task and I am sure that together we can make a difference," Annan told Wen.

"More than 35 Syrian soldiers came across the border and started to destroy houses," said Abu Ahmed, 63, a resident of the rural mountain area of al-Qaa. 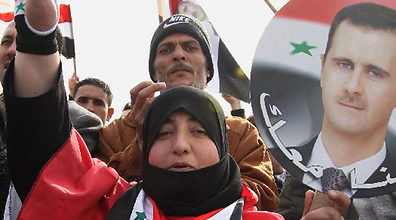 Another resident said that the soldiers, some traveling in armored personnel vehicles, fired rocket-propelled grenades and exchanged heavy machinegun fire with rebels.

Baba Amr was the site of a monthlong siege by government forces who battled rebel fighters before driving them out. Hundreds of people were killed in the fighting there.

On Monday news websites affiliated with the opposition reported that Syria's Defense Ministry issued restrictions requiring men between the age of 18 and 42 to obtain permission from military recruitment and immigration departments before leaving the country. The move is apparently aimed at forcing Syrian men to join the army amid reports of desertions by conscripts. According to some reports, the restrictions went into effect on Monday.

A Saudi website contacted a number of young Syrians who claimed they had been prohibited from leaving the country.

In Aleppo, Syria's second-largest city, half of the passengers who boarded a flight to Algeria were ordered off the plane because they did not meet the criteria specified in the new regulations.

A Syrian human rights activist said 10 people were killed Tuesday in attacks by Syrian army forces across the country. Assad has used the army to crush protests against his 12-year rule. The United Nations says more than 8,000 people have been killed in the crackdown while Syrian authorities blame foreign-backed terrorists for the violence and say 3,000 soldiers and police have been killed. Reuters and AP contributed to the report