Participants at 'Friends of the Syrian People' conference in Istanbul say Saudis, other Gulf states setting up multimillion-dollar fund to pay opposition fighters. Clinton: We cannot sit back and wait any longer

An international coalition said Sunday that it will provide funding and communications equipment to Syrian rebels and opposition activists, reflecting a shift toward military options that might oust Syrian President Bashar Assad after a year of failed diplomacy aimed at stopping his crackdown on dissent.

Participants at a meeting on Syria, held in Istanbul, said Saudi Arabia and other Gulf countries are creating a multimillion-dollar fund to pay members of the rebel Free Syrian Army and soldiers who defect from the regime and join opposition ranks. One delegate described the fund as a "pot of gold" to undermine Assad's army.

In addition, US Secretary of State Hillary Rodham Clinton said the United States is providing communications equipment to help opposition members in Syria organize, remain in contact with the outside world and evade regime attacks.

"We are discussing with our international partners how best to expand this support," Clinton said. The large-scale plan by Gulf countries to help Syria's badly overmatched rebels offers a solution to the international divide over whether to arm the rebels or support them through only non-lethal or humanitarian means. It also reflects frustration with appeals to Assad to stop his crackdown on dissent, as well as hopes of forcing his ouster by shifting the military balance on the ground. Conference participants confirmed the Gulf plan on condition of anonymity because details were still being worked out. It was unclear how the fund would be set up and monitored, or how the money, allegedly earmarked for salaries, would be guaranteed. A participant said the fund would involve millions of dollars every month. 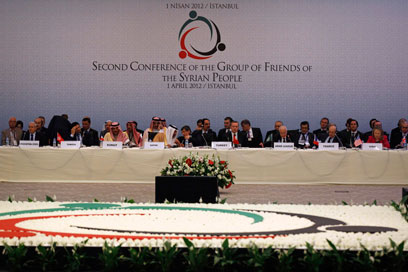 The Saudis and other Arab Gulf states have proposed giving weapons to the rebels, while the US and other allies, including Turkey, have balked out of fear of fueling an all-out civil war. Washington hasn't taken any public position on the fund, but it appears that it has given tacit support to its Arab allies.

The salaries would aim to entice reluctant servicemen in Assad's military to break ranks and join the insurgency. With Syria's economy in a spiral, the Syrian opposition and US and Arab officials hope soldiers will desert in large numbers and accelerate the downfall of the Assad regime. At the meeting in Istanbul, delegates from dozens of countries also sought to increase pressure on Assad by pushing for tighter sanctions and increased diplomatic pressure, while urging the opposition to offer a democratic alternative to his regime. Yet the show of solidarity at the "Friends of the Syrian People" conference was marred by the absence of China, Russia and Iran - key supporters of Assad who disagree with Western and Arab allies over how to stop the bloodshed. A peace plan by UN-Arab League envoy Kofi Annan has so far failed to take hold amid fresh reports of deadly violence. "The Syrian regime should not be allowed at any cost to manipulate this plan to gain time," Turkish Prime Minister Recep Tayyip Erdogan said in an opening address. Erdogan also indicated military options might have to be considered, if Syria does not cooperate with Annan's plan and the UN Security Council fails to unite in opposition to Assad. He referred to the vetoes of UN censure of Assad by Russia and China, which fear the measures could lead to foreign military intervention. 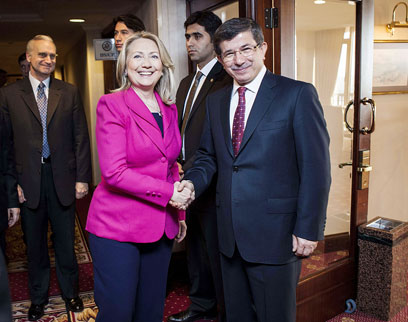 "If the UN Security Council fails once again to bring about its historic responsibility, there will be no other choice than to support the Syrian people's right to self-defense," Erdogan said.

Clinton also expressed skepticism that the Syrian government would observe Annan's plans, which call for an immediate cease-fire and a Syrian-led negotiation process. "Nearly a week has gone by, and we have to conclude that the regime is adding to its long list of broken promises," Clinton said. "The world must judge Assad by what he does, not by what he says. And we cannot sit back and wait any longer." Clinton urged unity behind a plan that includes more sanctions, humanitarian aid, support for the opposition and the promise of justice one day for regime figures involved in atrocities. Burhan Ghalioun, leader of the opposition Syrian National Council, called for the strengthening of Syrian rebel forces as well as "security corridors" inside Syria, a reference to internationally protected zones on Syrian territory that would allow the delivery of aid to civilians. However, the nations meeting in Istanbul have so far failed to agree on such an intervention, which could involve the risky deployment of foreign security forces. "No one should allow this regime to feel at ease or to feel stronger by giving them a longer maneuvering area," he said, reflecting fears that Assad would try to use the Annan plan to prolong his tenure. "It's enough that the international community has flirted with the regime in Syria. Something has to change." In a statement, the Syrian National Council said weapons supplies to the opposition were not "our preferred option" because of the risk they could escalate the killing of civilians, but it appealed for technical equipment to help rebels coordinate. "For these supplies to be sent, neighboring countries need to allow for the transfer via their sea ports and across borders," the council said. The one-day meeting followed an inaugural forum in Tunisia in February. Since then, Syrian opposition figures have tried to convince international sponsors that they can overcome their differences and shape the future of a country whose autocratic regime has long denied the free exchange of ideas. Syria blasted the conference, calling it part of an international conspiracy to kill Syrians and weaken the country. A front-page editorial in the official Al-Baath newspaper called it a "regional and international scramble to search for ways to kill more Syrians, sabotage their society and state, and move toward the broad objective of weakening Syria." In Istanbul, police used tear gas and batons to disperse a group of about 40 Assad supporters who tried to approach the conference building. Many held portraits of the Syrian leader. One man waved Chinese and Russian flags. The delivery of humanitarian aid to Syria's beleaguered civilians is a key provision of Annan's plan. Clinton announced $12 million in additional aid for Syria's people - doubling the total American assistance so far. Germany, whose foreign minister, Guido Westerwelle, attended the Istanbul meeting, said it was nearly doubling its humanitarian contributions to (EURO)5.7 million ($7.6 million). But a comprehensive solution did not appear imminent without the cooperation of the Syrian government, whose military assaults on towns and cities have forced hundreds of thousands of people to flee their homes. Syrian rebels, including army defectors, are fighting regime forces, but have been unable to consolidate their hold on territory because they are heavily outgunned. Tens of thousands of Syrian refugees have fled to neighboring Turkey, Lebanon and Jordan, and Turkey has floated the idea of establishing a buffer zone inside Syria, if the flow of displaced people onto its territory becomes overwhelming. There are concerns that foreign intervention, even if it has a humanitarian goal, could widen the conflict by dragging in other countries and triggering a surge in sectarian tensions. The United Nations estimates more than 9,000 people have been killed since the uprising to oust Assad began a year ago.