Supreme Court says too much time had passed since Israeli authorities transferred Shepherd Hotel to private developers. Husseini family: It's a symbol of Palestinians' rights to their land and to Jerusalem

Israel's Supreme Court ruled on Monday that a prominent Palestinian family could not claim ownership of a landmark and now derelict building in east Jerusalem - paving the way for a Jewish housing project.

The Husseini family said the Shepherd Hotel, now partially demolished, is a symbol of the Palestinian rights to their land and to east Jerusalem, and criticized the court ruling.

The Shepherd Hotel was built in the 1930s and served as the home of Jerusalem grand mufti Haj Amin Husseini, who fought the British and Zionists.

It was declared "absentee property" by Israel after it was captured and annexed to Jerusalem in 1967. The title was transferred to an Israeli firm, which sold it in 1985 to Irving Moskowitz, a Florida businessman and patron of Jewish settlers. 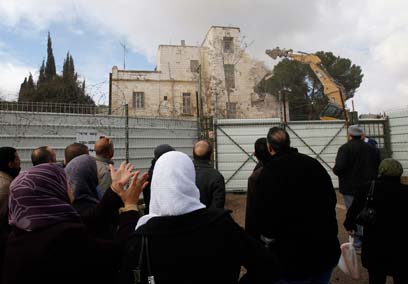 In 2009, Israel's Jerusalem city hall approved a project to replace the building with a block of 20 apartments. Israeli officials said Washington had voiced its opposition to the plan to Israel's ambassador in the United States.

"This property, which is legitimately ours, represents the Palestinians' rights to their land and to Jerusalem," Mona Husseini, heir to the property and Husseini's granddaughter, said on Monday.

In dismissing the family's case, the court said too much time had passed since Israeli authorities had transferred the property to private developers for a legal challenge to be brought, a lawyer for the petitioners said.

The family said it had been unaware at the time that the site had been sold off.

"The court clearly sided with the other party, and this proves that the Israeli courts have never been fair to Palestinians," said Adnan Husseini, the Palestinian Authority-appointed mayor of Jerusalem and a member of the extended family.

The family said, however, they would continue to seek legal action "against the odds."

The future of Jerusalem is at the heart of the Israeli-Palestinian conflict. Citing historical and Biblical links, Israel regards all of Jerusalem as its indivisible capital.

Palestinians want east Jerusalem to be the capital of the state they aim to create in the West Bank and the Gaza Strip, and say Jewish construction in these areas could deny them a viable country.

Some 250,000 Jews live in east Jerusalem and adjacent areas of the West Bank that Israel annexed to its Jerusalem municipality after the 1967 conflict. east Jerusalem has 300,000 Palestinian residents.