Western-backed PA says it has poured $7 billion to Gaza since Hamas seized control in 2007, blames Hamas for stymieing efforts to balance books

Paying for the upkeep of the Gaza Strip while its political rival actively blocks revenues flowing back is taking its toll on the deficit-racked Palestinian Authority.

A barrage of mutual accusations in recent weeks has driven Hamas and Fatah ever further apart as stalled efforts at reconciliation and economic stagnation have jangled nerves on both sides.

Crippling power cuts in the small coastal enclave have only added to the acrimony and lifted the lid on often opaque Palestinian funding.

The PA says it spends $120 million a month, or more than 40 percent of its whole budget, on salaries and services in Gaza despite being driven out in a brief civil war with Hamas five years ago, anxious to show the world that despite the political divisions, the Palestinians remain one people with a single administrative core.

The PA, which continues to exercise limited self-rule in the Israeli-occupied West Bank, has never recognized Hamas's rule in the Gaza Strip and still pays wages to former PA personnel in the enclave.

Israel maintains a tight blockade on the Gaza Strip with the help of neighboring Egypt.

"In return Hamas does not pay for any of the needs of the people in Gaza. On the contrary, it sells the medicine that we send for free, and keeps the money," said Ahmad Assaf, a Fatah spokesperson in the West Bank.

Hamas denies this and says the PA is just funneling foreign donations ear-marked for the Palestinian people.

"Vital sectors like education and health do not get support from them ... except for bits and pieces that arrive as donations from some countries," Hamas spokesperson Sami Abu Zuhri said.

The PA, which relies overwhelmingly on foreign donor aid, mostly from the European Union, the United States and Arab nations, is facing a projected $1.3 billion deficit in 2012.

Although most Western countries shun Hamas over its refusal both to renounce violence and recognize Israel, they let the PA use their aid cash to help the Palestinians in Gaza. 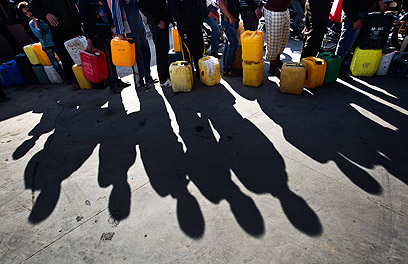 The EU says it contributed 837 million Euros ($1.1 billion) to the PA since 2008, 34 percent of which went to the Gaza Strip to cover civil servants' salaries and pensions.

"According to our information, the Hamas government only pays for the salaries of their employees and for their security apparatus," said an EU official, who declined to be named.

"We are convinced that we must continue paying this money because we know that if we didn't the Hamas government would do nothing," Fatah's Assaf said.

Hamas has tried to build up its own finances by attracting funds from its own foreign allies, such as Iran, while looking to impose a taxation code of its own on trade and business within Gaza.

But analysts say it too faces a budget crunch and is far from ready to take care of Gaza's 1.7 million-strong population, some 70 percent of whom live below the poverty line, according to UN statistics.

"Hamas wants to portray itself as being independent financially from the PA," said Naser Abdelkarim, a professor of economics at Birzeit University in the West Bank.

"But that's a myth. If the PA stops transferring money to the Strip, the reality in Gaza would deteriorate instantly."

Hamas agrees it wouldn't pay all the PA salaries, but says that's because most of the people concerned don't do any work after Fatah instructed its civil servants not to cooperate.

Another crucial issue for the PA is the taxes it should be collecting from Gaza. It says Hamas and Gazan traders systematically under-report the value of their imports to the Israeli authorities, which collect custom dues on behalf of the PA, costing the PA $400 million in "tax leakage" since 2007.

Hamas's economy minister, Ala al Rafati, admitted the group was withholding some $95 million in custom tax forms that the PA needs in order to collect revenues and would continue to do so until the PA agreed to wire the money straight back to Gaza.

"These invoices have not been sent to Ramallah since the split," al Rafati told Reuters by telephone from Gaza.

Palestinians' long-running hope of founding a state incorporating both the West Bank and Gaza, territories divided by Israel, has often papered over feuds between rival factions.

The arguments over finances have come out into the open partly because of a fuel crisis that has left much of the enclave without power for several hours each day since early February, sparked by Egypt's decision to clamp down on the flow of fuel smuggled into Gaza via a network of tunnels.

Critics of Hamas say it is at fault for the emergency for relying so heavily on cheap, illicit fuel, rather than working with the PA to secure alternative supplies.

The PA says it pays more than $50 million a month to an Israeli energy company that feeds power into Gaza, but Hamas refuses to hand over money from electricity bills.

"We have repeatedly asked Hamas to transfer the money they collect so that we can continue to provide them with fuel. But nothing gets sent," said Omar Kittaneh, the head of the PA Power Authority.

The PA admits that nothing is going to change fast. As with many of the issues that bedevil Palestinian politics, the two sides are stuck in a rut.

"Contributing a large part of the PA budget to the Gaza Strip has become the status quo and this will not change any time soon," said PA spokesman Ghassan al Khatib.