PARIS – Forty pro-Palestinian activists who arrived in Israel as part of the "Welcome to Palestine" fly-in protest have been denied entry to the country.

Three people who arrived aboard an El Al flight from Paris Sunday morning were questioned at a booth set up by the Interior Ministry at Ben Gurion Airport. They were subsequently released and allowed entry into the country.

A Portuguese national who arrived in Israel aboard a Royal Jordanian flight was denied entry, as was a Canadian citizen who arrived on an American Airlines flight. The two were expected to be deported.

Four French women were denied entry to Israel at around noon. 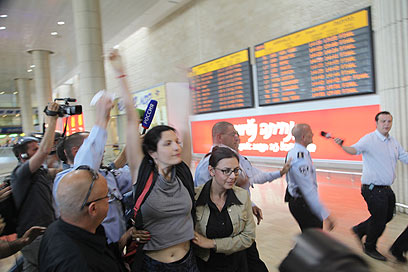 Airport officials said that so far a total of 40 activists, including 33 French nationals, two Italians, two Spanish nationals and three more activists from Canada, Portugal and Switzerland have been denied entry to Israel. In addition, they said, a number of Israeli leftists were held for questioning after they waved signs in support of the fly-in protest and attempted to disturb the peace.

The activists, who were all questioned by Immigration Authority officials, are expected to be deported from the Israel.

Twenty-seven of the French activists – 14 men and 13 women – have been transferred to Givon Prison in Ramla, where they will be held until Israeli authorities organize their return to France.

Police officials said hundreds more activists are expected to arrive in Israel throughout the day.

Earlier, dozens of activists gathered at Paris' Charles de Gaulle Airport protest their "exclusion" from Israel. Some of the foreign activists received notices alerting them to the fact that their flights to Israel had been cancelled while others managed to issue their boarding cards but are not sure they will be able to reach the Palestinian Authority. During the protest they called out: "Today the barrier is here," "Israel get out, France is not yours" and "Let us reach Palestine."

A sign waved by the protesters read, "France, a new Israeli settlement?"

The activists in Paris sought to make it clear that they were not operating against Israel, rather they were seeking to carry out a "pacifist action" and go to Bethlehem to see the situation with their own eyes. The flytilla organizers briefed activists from around the world through social networks on methods of challenging the airports and governments and how to reach the airports with boarding cards in hand.

"The (foreign) governments must pressure Israel so that it will allow the arrival of visitors into the occupied territories. This blockade is a breach of the fourth Geneva Convention. Israel has turned Palestine into a huge prison," they wrote.

The organizers noted that the Oz Unit at the Immigration Authority chose to halt its strike due to the flytilla and claimed: "Racism unites the government and its employees." The fly-in activists received precise directions explaining how to act should the Israeli authorities refuse to allow them entry into Israel. The activists were told to leave a copy of their passport with a family member and to take the telephone numbers of local government officials in their countries.

The activists were also briefed on the rules and regulations at Israel's airport in order to make it easier for them to deal with arguments against allowing them to enter Israel.

Lihi Rothschild, an Israeli activist and one of the organizers of the 'flytilla,' said Israel's "willingness to arrest people who did not commit any crime and say they only came to visit Palestine is a hysterical response."

Speaking to Ynet, she said, "It's unfortunate that European airlines are cooperating with this violation of human rights by the State of Israel - and we consider them accomplices to the crime."

Rothschild estimated that about two-thirds of the foreign activists will succeed in boarding a flight to Israel, adding that those who enter Israel will be presented with drawing made for them by children in Bethlehem.

Addressing the "welcome" letter from the Israeli government, which the activists are expected to receive upon their arrival at BG Airport, the Israeli activist said, "In this letter Israel is repeating the same lies and excuses. Israel is not the only democracy in the Mideast – it is not a democracy at all. Instead of taking responsibility for the crimes it is committing, Israel chooses to deal with its human rights violations by pointing out that there are worse places."

Internal Security Minister Yitzhak Aharonovitch on Saturday expressed satisfaction with the cooperation of foreign airlines who he said are preventing those identified by Israel as pro-Palestinian activists from boarding their flights.