Huge achievement for Israel: Arik Ze'evi, Israel's top judo wrestler for more than a decade now, won the European judo championship in his class for the fourth time Saturday.

Prime Minister Benjamin Netanyahu spoke with Ze'evi Saturday and congratulated him on his achievement. Ze'evi thanked the PM and said he was very touched to stand on the podium and hear Israel's national anthem, HaTikvah. 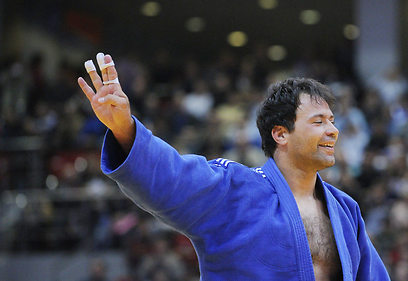 "You touched all of us," Netanyahu said. "You put on a show on behalf of the state of Israel; you brought us great honor and hope."

Meanwhile, President Shimon Peres also conveyed his well-wishes, writing that he is "filled with amazement and appreciation over this wonderful gold medal win."

Ze'evi won the gold medal after defeating Levan Jorjoliani from Georgia in the under-100 kg category at the championship, held in Russia this year. The victory marked the ninth medal in Ze'evi's illustrious career, as the veteran 35-year-old athlete prepares to embark on the Olympic championship while in top form. Ze'evi already won a bronze medal at the 2004 Olympics in Athens.

Ze'evi's medal was the fourth won by Israel's team at the European championship.

Before heading to a restaurant to celebrate the win with members of Israel's delegation, Ze'evi told Ynet: "It's an amazing feeling. I didn't realize I would get so emotional over the victory…this is likely my last European championship, so I don't know when I'll again hear our national anthem on the podium."

Ze'evi said that he's dedicating the gold medal to his daughter, adding that "I hope to be smiling like this after the Olympics too."

In 2011, Ze'evi won a gold medal in Moscow's Judo Grand Slam. During that competition, Ze'evi was snubbed by an Egyptian judo wrestler, who refused to shake the Israeli athlete's hand after the latter's victory.

Attila Somfalvi contributed to the story