Iran's Navy has the ability to deploy its vessels three miles off the US east coast, a high-ranking Iranian Navy commander was quoted as saying by the Fars news agency.

"Our naval forces are so powerful that we have a presence in all the waters of the world and, if needed, we can move to within three miles of New York," Revolutionary Guards Navy Commander Rear Admiral Ali Fadavi was quoted as saying during a speech to students at the University of Yazd earlier this week.

US deploys fighter jets to base near Iran Report: Iranian government websites under cyber attack

The admiral was speaking on the anniversary the failed 1980 US attempt to rescue American hostages held captive in the US embassy in Tehran. 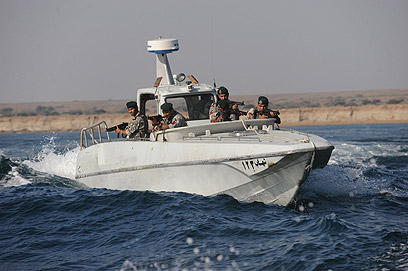 Fadavi said dominance in the Persian Gulf is "the only tool for the Americans to rule the world," charging that this prompts the US to "confront any other power that threatens their status."

Earlier, Fox News reported that the US military has deployed several F-22 fighter jets to an allied base less than 200 miles (320 km) from Iran.

According to the report, the US Air Force strongly denied ordering the deployment s a show of force against Iran, or that it is in some way related to a potential strike on the Islamic Republic's nuclear facilities. It claimed the measure is part of routine activity and "security cooperation with regional partners."