The High Court of Justice has partially accepted the State's motion to postpone the demolition of two illegal structures in Beit El and gave the State Prosecutor's office a two-month extension to examine the issue.

Just two days after the State said it was reassessing its policy mandating the demolition of unauthorized Jewish homes built on private Palestinian land the West Bank, the Prosecutor's Office told the High Court of Justice the policy has not changed and that all illegal Jewish structures would be removed.

During Sunday's hearing on the State's request to postpone the demolition of two unfinished homes in Beit El, Attorney Osnat Mandel from the Prosecutor's Office said the policy of razing illegal structures was intact and that the State was merely asking the court for a three-month extension to further examine the issue. 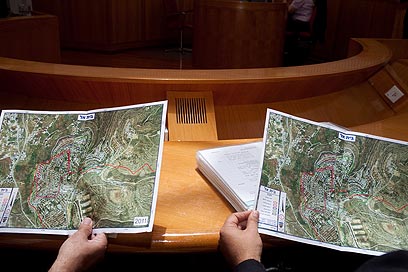 A petition filed in 2008 by the Yesh Din human rights group on behalf of Abdul Rahman Ahmed Qassem claimed that the unfinished homes in Beit El were built on his property and must therefore be razed. In April 2011 the State announced its plan to demolish the structures within a year, but just before the year was up it asked to postpone the razing until May 31. On Friday the State asked for another three-month extension, claiming Prime Minister Benjamin Netanyahu needed to study the case further.

During Sunday's hearing, Supreme Court President Asher Grunis and justices Edna Arbel and Yoram Danzinger determined that a ruling on the matter would be issued at a later date. During the hearing Arbel asked Attorney Mandel whether the State plans to change its razing policy. The attorney said in response that the policy was intact, but added that the political establishment was looking to set the priorities for the implementation of this policy. "All the State is asking for is a three-month extension to set up a special task force to examine the issue," she said.

Attorney Michael Sefard, representing the petitioners, said Netanyahu and Defense Minister Ehud Barak promised the court they would see to it that the illegal structures are destroyed. "This constitutes contempt of court," he said. "The (State) is telling us a fabricated tale just two days before the razing (of the unfinished homes) is set to take place."