Lapid presents 'service for all' plan

Speaking at the first meeting of supporters of his new political movement Yesh Atid (There's a Future) on Tuesday, Yair Lapid presented a plan for the enlistment of all Israelis into the IDF or the National Service program. "The Tal Law was faulty, we cannot take it anymore," he said, while clarifying that "we do not hate haredim."

The controversial Tal Law effectively exempted ultra-Orthodox from military service. In February theHigh Court of Justice accepted petitions against the law, and will not be extended in August as a result.

According to Lapid's plan, during the first five years of the program the haredim will be automatically exempt from IDF service. "(It is with a heavy heart) that we present this proposal, because logic and justice demand the immediate recruitment (of haredim) without compromises," he told the activists gathered at the Diaspora Museum in Tel Aviv. 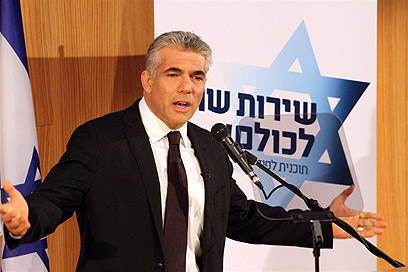 However, Lapid predicted that more than 50% of haredim will prefer to leave the yeshivas and join the work force. This, he said, will save the State NIS 1.5 billion ($400 million), which will be allocated towards raising the salaries of those who serve in the army and towards academic scholarships for soldiers.

When the five years are up, according to Lapid's plan, every 18 year old will be obligated to enlist in the IDF or join a civil service program. The number of new IDF recruits will be determined according to the military's needs. Combat soldiers and troops belonging to units that support combat outfits will serve three years, while other soldiers will serve two years. Soldiers who serve three years will receive a minimum age salary as of their second year of service and will be eligible for an academic scholarship upon their release from the army. According to the plan, those who refuse to enlist will be denied of the right to academic or housing stipends. However, they will still receive Social Security payments. "We must explain to the haredi public that the State cannot put up with the current situation anymore – both economically and morally – because it is tearing us apart from within and creates disgraceful phenomena, such as draft-dodging," Lapid told his supporters. "We must explain to them that this is simple math. We cannot support tens of thousands of yeshiva students who do not enlist in the army and do not join the work force." The journalist-turned-politician claimed that the major parties cannot provide a solution. "Likud, Labor and Kadima remember that there is a problem with the IDF service model only during times such as these (before general elections)," he said. The Israeli Forum for the Promotion of Equal Share in the Burden called Lapid's plan "nothing more than deception," and claimed that a five-year exemption for the haredim discriminates against other sectors of society.