Some 4,000 Israeli teenagers gathered in Tel Aviv on Tuesday to mark International Workers' Day, or May Day. Some of the teens held a rally outside the Histadrut labor federation building, while others marched through the city's streets while waving red flags.

Labor party chairwoman Shelly Yachimovich also attended the rally. "I've come as a guest, but I sympathize with the values of crowd that has gathered here," she said. "This is a holiday for anyone who believes that a worker should not be a slave, but a person with basic rights," she said. 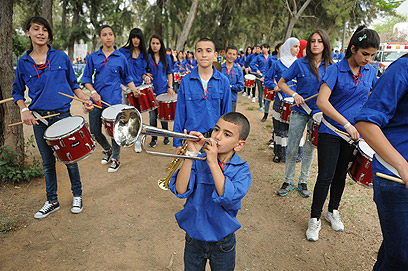 'Worker should not be a slave.' May 1 march (Photo: Yaron Brener)

Addressing the resignation of former Kadima party leader Tzipi Livni, Yachimovich said, "I'm sorry she left. I'm certain she would not have attended this May 1 rally, but she is an honest and decent woman."

Tomer Shmukler of the Dror-Israel Movement, who helped organize the event, said this year's rally highlighted the battle against the exploitation of teens, adults and foreigners at the workplace. "Many people opened their eyes following last summer's social protest. I believe the current government does not want to change its policy, which increases the socioeconomic gaps," he said. Social activist Yigal Stern said that "due to the social protest, many people now understand who the little man is and who the greedy tycoons are. I'm certain that this summer people will take to the streets once again." Yoav Godring, a Tel Aviv City Council member and one of the march's organizers, said, "This is the first time since the social protest that the people are demanding that social justice be translated into a socialist alternative to the economic model that is currently in place – whereby the government prioritizes the interests of the tycoons over those of the workers." Daniel, a transsexual from Tel Aviv who also took part in the march, called for an end to the discrimination against the community by employers: "Transsexuals should be able to become teachers, pilots, doctors or psychologists."