US flag in flames during Amman rally
Photo: EPA

Israeli flags were burned on Friday during a rally in Amman against Jordan's peace treaty with the Jewish state, Ynet reported.

Following Friday prayers at the al-Husseini mosque in the Jordanian capital, hundreds of people burned Israeli and US flags while chanting "Death to Israel" and "America the snake."

The protesters called to immediately expel the Israeli ambassador and close the Israeli embassy in Amman. 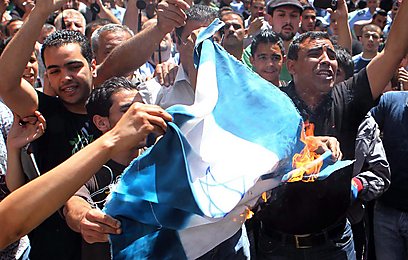 The demonstrators also chanted slogans against the new Jordanian government and its prime minister, Fayez Tarawneh, who was appointed by King Abdullah just a few days ago. They demanded the government's dissolution. Tarawneh had already served as prime minister from 1998 to 1990.

The political turmoil in the Hashemite Kingdom has resulted in the appointment of four different prime ministers over the past 14 months alone. The previous PM, Awn Khasawneh, resigned late last month after barely six months in office following growing criticism of a draft election law his government was preparing. Khasawneh, 62, was asked to form a government last October by King Abdullah after protests calling for faster political reforms in the kingdom.

But his proposed election law drew criticism, including from tribal parliamentarians and the powerful intelligence services, who felt it favored Islamist politicians.

During a smaller rally held at the end of March, several dozen demonstrators gathered near the Israeli embassy in Amman also burned Israeli flags.