Rabbi Shlomo Amar says recent wave of murders in Israel result of lax education, lack of boundaries and ignoring Jewish tradition: 'When everything is permissible and a person gets what he wants, anyone who tries to limit him is killed'

Chief Sephardi Rabbi Shlomo Amar said that the recent wave of murders is the result of lax education and promiscuity. "A person who is allowed (to do) anything doesn't respect boundaries," the rabbi told Ynet.

"And so we've reached a situation in which young people – who aren't bad or criminals – murder someone who criticizes them; (a situation) in which women murder, children kill their parents and parents kill their children. I've heard about it and I'm frightened."

Amar said that there is a "terrible crisis in the education of the (young) generation," mainly a lack of boundaries. "Today, people think that anyone who wants to maintain minimal modesty is primitive and belongs to a different generation. Things that were condemned by every other generation, considered abhorrent by the Torah, have become legitimate." Or-Gil Moetti, 17, from Rehovot was stabbed to death over the weekend

The idea of shame has been trampled, the rabbi continued, adding that people have been left "naked and exposed," which leads them to awful deeds.

"There are people who espouse liberality as an ideology, and now it has reached 'Thou shalt not kill' – an act that no one other than terrorists would justify. When everything is allowed and a person does what he wants, anyone who tries to limit him or even criticize (him) is killed. These things are done more and quicker than we've (ever) seen," Amar noted. 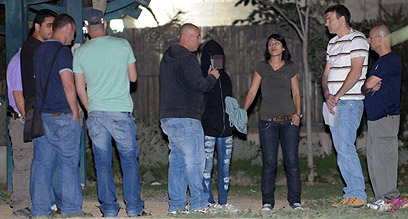 "It's a blow to us all," the rabbi said, adding that "marginalized people are everywhere, and without education, (violence) would occur in every sector."

According to Amar, the way to reduce violence among youths is for them to become closer to decency, Jewish tradition and the Torah, "which also belongs to all of us."

Amar also had words for the country's politicians: Stop with "us" and "you," he urged, adding that politicians should serve as an example of tolerance and restraint. "Unfortunately, and I'm ashamed to say, the haredim and the secular are attacking each other, which is very dangerous. Even when you want to rebuke someone, it doesn't need to turn into hate," he said.

Addressing the announcement of the early Knesset election, Amar said that Israel's political parties should embrace tolerance and fence-mending, and not put out incendiary propaganda, even in the face of "intolerable opinions."