Twin suicide car bombs that exploded outside a military intelligence building in Damascus and killed 55 people, tossing mangled bodies in the street, were the deadliest attack against a regime target since the Syrian uprising began 14 months ago.

Thursday's bombings fueled fears of a rising Islamic terrorist element among the forces seeking to oust President Bashar Assad and dealt a further blow to international efforts to end the bloodshed.

The first car bomb went off on a key six-lane highway during the morning rush hour, knocking down a security wall outside the government building and drawing people to the scene, witnesses said. A much larger blast soon followed, shaking the neighborhood, setting dozens of cars ablaze and sending up a gray mushroom cloud visible around the capital.

Syrian state TV video showed dozens of bodies, some charred or dismembered, strewn in the rubble or still inside damaged cars. An Associated Press reporter at the scene saw medics in rubber gloves picking through the site for human remains amid the two craters that were blasted into the asphalt. The Interior Ministry, which oversees the police and security services, said 55 people were killed and more than 370 were wounded. Officials said suicide bombers detonated explosives weighing more than 1,000 kilograms (2,200 pounds). "The house shook like it was an earthquake," Maha Hijazi said, standing outside her home nearby. World powers seeking to halt Syria's unrest condemned the attack and urged all sides to adhere to a cease-fire brokered by UN and Arab League envoy Kofi Annan. 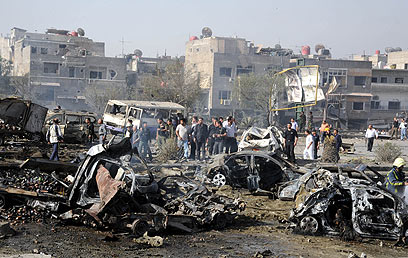 The Obama administration condemned the attack and expressed concern that al-Qaeda may be increasingly taking advantage of the country's prolonged instability.

Defense Secretary Leon Panetta told reporters that US intelligence indicates "an al-Qaeda presence in Syria," but said the extent of its activity was unclear. "Frankly we need to continue to do everything we can to determine what kind of influence they're trying to exert there," Panetta said. He also lamented that a month of efforts to implement a UN ceasefire plan haven't worked. British Foreign Secretary William Hague said "the onus is on the Syrian authorities to implement a full cease-fire and begin the political dialogue required by the Annan plan," while the UN Security Council said in a statement that "any acts of terrorism are criminal and unjustifiable regardless of their motivation." Maj. Gen. Robert Mood, the Norwegian head of a team of observers overseeing the cease-fire, toured the site and said the Syrian people do not deserve this "terrible violence." "It is not going to solve any problems," he said. "It is only going to create more suffering for women and children." Annan, too, appealed for calm. "The Syrian people have already suffered too much," he said in a statement. 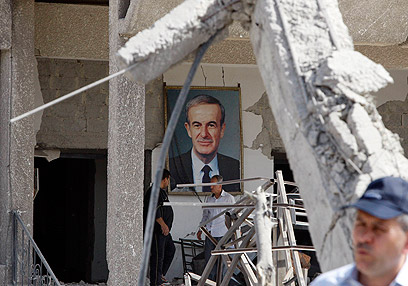 The blast was the largest and most deadly yet in a series of bombings targeting state security buildings since last December. Most of these have been in Aleppo and Damascus, Syria's two largest cities, which have generally stood by Assad since the popular uprising against his rule broke out in March 2011.

The government blamed the attack on armed terrorists it says are driving the uprising, which has grown into the strongest threat to the Assad family dynasty in its four decades in power. The Syrian Foreign Ministry sent letters to UN Secretary-General Ban Ki-moon and the head of the Security Council, asking the body "to take steps against states, parties and media outlets that practice and encourage terrorism," Syria's state news service said. Syria's UN ambassador, Bashar Ja'afari, told the Security Council that a second bombing in Aleppo on Thursday also killed civilians and damaged property. The Britain-based Syrian Observatory for Human Rights said five intelligence officers were killed when a bomb targeted their car in Aleppo. It was unclear if this was the same event. A leader of the Free Syrian Army, an umbrella group of anti-regime militias throughout the country, condemned the Damascus attack and denied the group was involved. Capt. Ammar al-Wawi accused the government of staging the attack to turn the world against the uprising. There was no immediate claim of responsibility, but a shadowy militant group calling itself the Al-Nusra Front has claimed past attacks through statements on militant websites. Little is known about the group, although Western intelligence officials say it could be a front for al-Qaeda's Iraq branch. Ja'afari, Syria's UN ambassador, argued that the bombings were evidence of "terrorist activities" by "groups and organizations affiliated with al-Qaeda." He also claimed Syria has a list of "12 foreign terrorists" killed in Syria, including one French citizen, one British citizen and one Belgian citizen and he offered the list to the 15 Security Council members. In Washington, Panetta said he had "no information" that al-Qaeda was involved in Thursday's attacks, although he repeated previous statements that intelligence indicates the group does indeed have a presence in Syria. The scope and mystery of the bombing raised fears that Syria's unrest is transforming from an Arab Spring-inspired call for change into a bloody Iraq-style insurgency. The uprising began with protests calling for political reform. The government swiftly cracked down, deploying tanks and troops to quash dissent, and many in the opposition took up arms. The UN said weeks ago that more than 9,000 had been killed. Hundreds more have died since then. Annan's peace plan calls for a ceasefire to allow for dialogue by all sides on a political solution. But daily violence has undermined the plan since the truce was supposed to begin April 12, with regime forces still shelling opposition areas and rebels attacking troops. The bombings appeared to be beyond the capabilities of the known rebel groups, mostly made up of army defectors with light arms. One organizer denied that the rebels have the means or the will to plot such attacks. "If we had the power to do this, we would have changed the equation a long time ago," said the organizer, who identified himself only as Abu Mustafa, speaking by phone from northern Syria. "We built bombs with fertilizer and now we have a hard time even getting fertilizer." Some in the opposition blamed the Assad regime. "It wants to convince the world that if the regime falls, only terrorism will remain," said al-Wawi, of the Free Syrian Army. Others said the size of the attack set it apart from previous bombings. An activist who gave only his first name of Lawrence for fear of government reprisal said he heard the booms and felt his building in Damascus shake. While previous bombings in the capital made him suspect that the government somehow staged them, Thursday's blast was different. "Today, there is no doubt. This was not fabricated," he said, adding that although he didn't know who was behind the attack, he worried it would harm the opposition. "This will certainly affect us, media-wise and internationally," he said. "This is not to our advantage." The attack was the fifth to hit Damascus since December 2011, when a car bomb killed 44 people outside an intelligence compound. On Jan. 6, an explosion at a Damascus intersection killed 26 people, many of them police. Two car bombs on March 17 killed at least 27 people, also near intelligence and security buildings. On April 27, an explosion killed nine security officers. Syrian officials said all were suicide attacks.