Nasrallah: Hezbollah can hit any target in Israel

Hezbollah leader Hassan Nasrallah threatened in a speech on Friday that the terror group has bolstered its capabilities and can now destroy any specific target within "occupied Palestine."

Nasrallah told supporters via a video link that if a new war breaks out, the group will ruin targets in Israel for every building destroyed in Beirut.

'Hezbollah has 300 operatives in NYC' Op-ed: Hezbollah failure in India

"The era in which we are afraid and they are not is over," he said. "The time has come to declare that we are here to stay, and they must cease to exist." 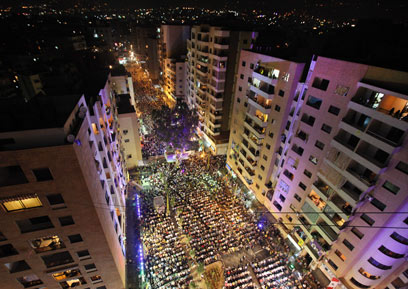 He said that Hezbollah is "capable of striking very specific targets not only in Tel Aviv but everywhere in occupied Palestine."

Nasrallah asserted that Israel's goal in the Second Lebanon War was to "crush the resistance" – and not to drive Hezbollah away from southern Lebanon's Litani River or to liberate soldiers captured by the organization, as the Jewish state claimed.

"The war has failed to achieve its goal," he said.

"The Israeli enemy has tried to make our lives hell," he added. "The question is, why wasn't it content with the killings in the battlefield or with bombing military bases? Why did it expand its aggression to destroy homes and schools? It committed war crimes."

In 2006, Hezbollah and Israel fought a 34-day war that killed about 1,200 people in Lebanon and 160 in Israel. Hezbollah fired nearly 4,000 rockets at Israel during the war and is believed to have upgraded its munitions in recent years.

Nasrallah's speech focused on the rehabilitation of the Dahiya district in Beirut, an area that was severely damaged in the war.

"Today we celebrate the victory of restoration after the war," he said. "(…) The homeowners insisted on rebuilding their houses on the same spots where they were previously destroyed, and that's a message of celebration that is sent to the Israelis. This is the will of the people."

He mentioned the funds that were allocated by Iran for the renovation of the district.

"Without these funds, we wouldn't have been able to complete the restoration so quickly," he said.