"By the end of July we will pass legislation that will distribute the burden equally" without pitting the various sectors of society against one another, Prime Minister Benjamin Netanyahu said Sunday.

During the first cabinet meeting since Kadima joined the coalition, Netanyahu mentioned that a bipartisan task force has been set up to seek an alternative to the expiring Tal Law, which effectively exempts ultra-Orthodox from enlisting in the IDF.

"This is the first meeting of the broad unity government, and we have many challenges ahead of us. On behalf of all the ministers, I wish to welcome Shaul Mofaz and his Kadima faction," Netanyahu said. 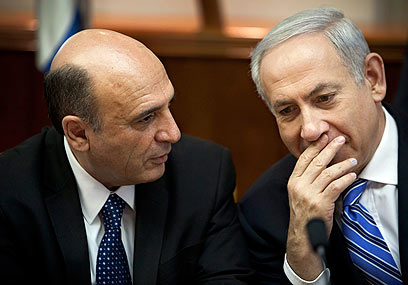 Last week Mofaz was sworn in as minister-without-portfolio and deputy prime minister after signing a controversial unity government agreement with Netanyahu.

"We have four key goals – finding an alternative to the Tal Law, changing the system of government, passing the budget and promoting the peace process," the PM added. Netanyahu also addressed Saturday's meeting between Israeli envoy Yitzhak Molcho and Palestinian President Mahmoud Abbas in Ramallah, saying he hoped peace negotiations would be resumed.

Minister Daniel Hershkowitz, the head of the Habayit Hayehudi faction, addressed the crisis surrounding the Givat Ulpana neighborhood in the Beit El settlement.

"The idea that homes will be destroyed is intolerable," he said, while urging the government to find a solution that would keep the neighborhood intact.

The High Court recently ordered the eviction and demolition of the Ulpana neighborhood, which was built on private Palestinian land.