Opposition to Iran obtaining nuclear weapons is widespread around the world, including in neighboring countries Egypt, Jordan and Turkey, and support for tough economic sanctions is high, according to poll released Friday.

Support for military intervention to prevent Iran from going nuclear is more divided, the Pew Global Attitudes survey of 21 nations found. Among the countries polled, support was highest in the United States at 63% and lowest in Russia at 24%, while at least 50% of the people surveyed in Britain, France, Germany, Spain, Italy, Poland and the Czech Republic favored military action.

Greece and Turkey are the only NATO members where a majority of people surveyed either did not support military intervention, or had no opinion, though majorities in both countries oppose allowing the Islamic republic to obtain nuclear weapons.

Iran insists its nuclear program is peaceful and aimed solely at producing nuclear energy. The US and Israel suspect Iran is pursuing nuclear weapons, but differences have emerged in how to persuade Tehran to curb its program.

The poll comes ahead of International Atomic Energy Agency chief Yukiya Amano's visit to Tehran over the weekend to sign a deal meant to allow the UN agency to resume a long-stalled search for evidence that Iran worked on developing nuclear arms.

An IAEA statement announcing the Sunday trip said only that Amano would "discuss issues of mutual interest with high Iranian officials" during his one-day visit. But diplomats said the visit was scheduled to allow both sides to agree on an accord outlining the mechanics of IAEA access to sites, information and officials for its investigation into whether Iran secretly conducted nuclear weapons research and development. The diplomats demanded anonymity because their information was confidential. 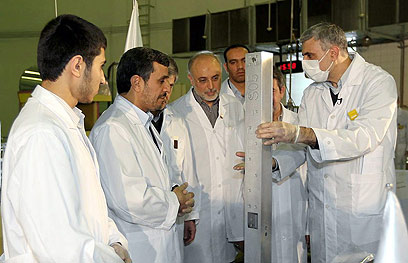 Amano's trip comes just four days ahead of a key meeting between six world powers and Iran where the six hope to wrest concessions from Tehran meant to ease concerns that it wants nuclear arms.

The Pew poll found that Iran's actions in recent years have damaged its standing in the neighboring Sunni-majority countries of Egypt and Jordan, where favorability ratings are low, support for military intervention reached 50% and approval of strengthening economic sanctions is high.

But in Turkey, a major trade partner of Iran, a majority opposes toughening sanctions.

Pakistan had the highest support for Iran's nuclear ambitions, at 50%. The poll found that the Shiite minority in Lebanon overwhelmingly supports Iran's nuclear program – 73% - though a strong majority of the religiously divided Lebanese population opposes it. Iran is a majority Shiite country.

Four rounds of UN sanctions have failed to persuade Iran to halt its uranium enrichment, a process that has civilian uses but is also key to bomb-making. But recent US and European measures, including an oil embargo and financial and banking sanctions, have bludgeoned Iran's economy by curtailing its ability to carry on economic transactions with the international community.

The US has plans in place to attack Iran if necessary to prevent it from developing nuclear weapons, Washington's envoy to Israel said Thursday.

Washington says diplomacy and economic sanctions must be given a chance to run its course, and is taking the lead in the ongoing talks between the six global powers and Iran.

The poll found that clear majorities of Americans of all political leanings - Republicans, Democrats and independents - support military action in Iran.

The survey of 26,210 people was conducted between March 17 and April 20 and has a margin of sampling error that ranged between plus or minus 3.2 and plus or minus 5.2 percentage points, depending on the country.