Nadav dreamt of being youngest Israeli to conquer world's highest peak. But his plans changed 300 meters from the summit, when he saw a Turkish climber lying unconscious on the ground – and decided to rescue him

Only 300 meters were between Nadav Ben-Yehuda and the title of "the youngest Israeli mountain climber to conquer the Everest summit." But Ben-Yehuda didn't hesitate for a second when he saw a Turkish climber lying unconscious on the ground.

"If I had continued climbing, he would have died for certain. Other climbers just passed him by and didn’t lift a finger, but I had no second thoughts. I knew that I had to save him," said the 24-year-old law student from Rehovot.
Rescue Operation
Jordan: Israeli hikers save British man
Matan Zuri
Yom Kippur War veteran rescues young Briton who fell from high cliffs in Jordan. 'I was sure we were going to lose him,' Yair Farjoun says
Jordan: Israeli hikers save British man
Ben-Yehuda's dream has always been to conquer the Everest summit. Being a professional mountain climber, he has already scaled many mountaintops around the world. Just two months ago, before leaving for Nepal, Ben-Yehuda broke an Israeli record in stair climbing when he ascended 76 floors in the Moshe Aviv tower in Ramat Gan, 13 times consecutively. Ben-Yehuda arrived in Nepal on March 19 and shed 18 kilograms from his weight while preparing to climb the world-famous peak.

But this climbing season, Mother Nature was unkind, causing massive snow storms and avalanches that claimed the lives of at least six people so far. Rescue helicopters that were called to evacuate stranded climbers only made the situation worse by creating wind turbulences that caused more snow avalanches. 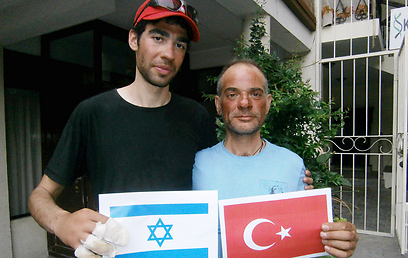 Politics don't matter (Photo: Nitzan Arni, Nepal Embassy)
Ben-Yehuda was scheduled to start his journey to the summit last Friday, but decided to delay it by one day, due to the weather conditions and over-crowdedness at the base. "I didn’t want to get stuck at these heights, so I decided to sleep at a base that is located at an altitude of 8,000 meters," he explained. "It was a difficult night. I slept in a sleeping bag inside a rickety tent set up in between rocks."

The following day, Ben-Yehuda started the final stretch of his climb. "Throughout the route, I kept seeing bodies of dead climbers," he recalled. But Ben-Yehuda was focused on his goal, and knew that at the rate he was going he could reach the peak as early as sunrise.

Then, only 300 meters before reaching the coveted destination, Ben-Yehuda spotted Aydin Irmak, a Turkish climber whom he met at camp, sprawled unconscious on the icy ridge.

"People passed him by and didn’t do a thing. I didn’t think for a second about politics – the fact that he was Turkish and I was Israeli. I also didn’t think about the glory. All I though about is that I can save this person – and that’s what I did," Ben-Yehuda noted. 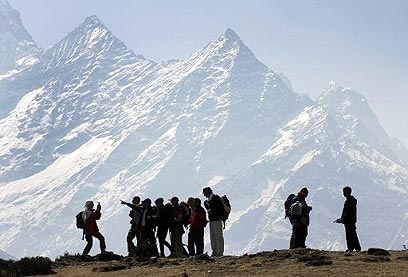 Everest peaks
The resourceful climber described the difficult journey down the mountain. "I attached him to my harness, and we started the descent. It was very hard to carry him because he was heavy. At times he would gain consciousness, but then faint again. When he woke up he would scream in pain, which made it even more difficult," he said, adding that it took 8 to 10 hours until they arrived at the closest base, located at an altitude of 7,900 meters. However, the young mountain climber had one last hurdle to overcome on the way down when his oxygen mask broke. Shortly afterwards, Ben-Yehuda encountered another climber, from Malasia, who was also in his last breaths. At that moment he spotted a group of climbers who were making their way up the mountain. He shouted over to them, and asked that they give the two injured climbers some oxygen. By doing so, Ben-Yehuda also managed to save the Malaysian climber.

After they reached the base, Ben-Yehuda and Irmak were evacuated by helicopter to Katmandu, where they were hospitalized. Ben-Yehuda suffered from severe frostbites in his fingers because he had to remove his gloves during the rescue operation.

"I hope the doctors don't have to amputate them, because I want to keep climbing," he said, adding that despite the heavy cost, he does not regret saving his Turkish friend. "I faced a choice – to be the youngest Israeli to ascent the Everest summit, which would have been good for my career, or to take the climber off the mountain and save his life. I picked the second option. I managed to do so thanks to all the training I did, which gave me enough power to descend the mountain while carrying another person on top of me." Expressing his gratitude, Irmak, 46, told Yedioth Ahronoth, "If Nadav wasn't there, I would have died on the mountain. It was a miracle. "I remember falling down. I woke up with Nadav standing over me and shouting my name. Nadav did a great thing. He built a bridge between Turkey and Israel, and our leaders can learn a lot from him. Politics doesn’t matter much, what matters is human nature. "I may have missed the summit, but I gained a new brother. Who knows, maybe one day we'll climb the Everest together," Irmak noted. Meanwhile, in their living room in Rehovot, Nadav's parents – Yoram and Dorit – are bursting with pride. "He did the right thing, no doubt," said Yoram. "This is the education he received not only at home but also from his military service in Golani – a friend in need comes first." Despite the hero's welcome that awaits him at home, Ben-Yehuda is upset about one thing – when people will ask him whether he reached the summit, he would have to say no.