Iran has presented its own "comprehensive" package of proposals to six world powers during talks in Baghdad between the two sides over its disputed nuclear program, Iranian media reported on Wednesday.

"In this session of negotiations, Iran presented to the P5+1 a package comprising five points that include a range of nuclear and non-nuclear issues," the Iranian Students' News Agency (ISNA) reported.

"In the first session, the P5+1 presented its proposals to Iran, but apparently from the Iranian point of view this package is not balanced."

A member of the Iranian delegation told AFP that the counter offer, which was presented by Iran's chief nuclear negotiator Saeed Jalili, refers to a number of issues that are not related to Tehran's nuclear program. 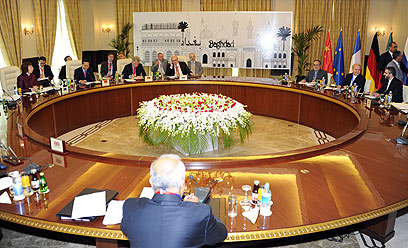 The Iranians, according to the report, also want to discuss the war on terror and drugs, as well as other burning issues. "The world powers are expected to respond to the proposal during talks scheduled for later this evening," the report said. 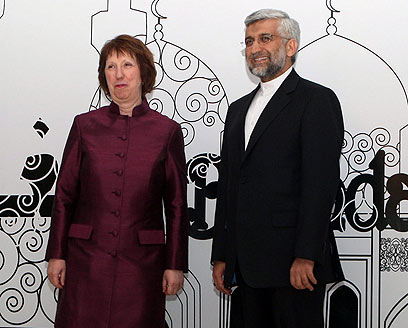 The proposal by the US and its negotiation partners focused on Iran's highest-level uranium enrichment - at 20% - which many world leaders fear could be quickly turned into warhead-grade material. Other details of the plan were not immediately disclosed.

But the proposal may meet a swift refusal from Iran. Its envoys seek agreements to lessen, or at least delay, sanctions that have targeted Iran's critical oil exports and cut off the country from lucrative European markets.

"We hope the package that we put on the table is attractive to them so they will react positively," Mike Mann, spokesman for the head of the European Union delegation that is leading the talks, told reporters. "It's up to them to react."

Mann would not discuss whether the 20% level enrichment represented a red line that could again scuttle the negotiations, which had only restarted last month after collapsing in early 2011.

On Tuesday the UN nuclear watchdog chief said he expected to sign a deal with Iran soon to boost its cooperation with an investigation into Tehran's disputed atomic activity, although differences remained.

Yukiya Amano, head of the International Atomic Energy Agency (IAEA), spoke a day after holding rare talks in Tehran and a day before Iran and six world powers will hold broader negotiations on the extent of Tehran's nuclear program.

"(A) decision was made to conclude and sign the agreement ... I can say it will be signed quite soon," Amano told reporters at Vienna airport after returning from Tehran.

Amano, who had been looking for a deal giving his inspectors a freer hand to investigate suspected atomic bomb research in Iran, described the outcome of his meetings in Iran as an "important development."

He said "some differences" remained but that Iranian chief nuclear negotiator Saeed Jalili had told him these would not pose an obstacle to an agreement.