Aggravated rape, abuse, sodomy, indecent acts, threats – these are just some of the charges included in an unusually severe indictment filed Friday against Ahmed Beni Jaber who is accused of raping a woman at a parking lot in Tel Aviv's Gan Hair shopping center. Jaber is also accused of trying to sexually assault the woman's boyfriend.

Tel Aviv District Court Judge Michal Agmon-Ronen granted the prosecution's motion to place the details of the indictment under a gag order, citing concern for the complainant's privacy. 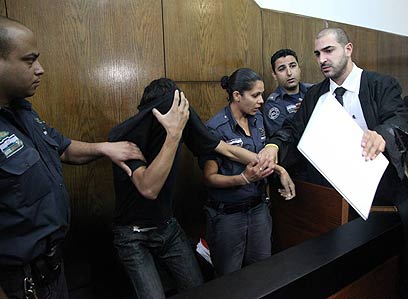 "This is one of the most shocking indictments I have ever read," the judge said. The indictment details the events of the night of May 11-12 and was meant to put an end to speculation over the brutal incident.

"I believe that publishing the details as they appear in the indictment will gravely hurt the complainant," the prosecutor said. Judge Agmon-Ronen said, "Reading it, it's inconceivable."

The judge nevertheless allowed the circumstances of the suspect's arrest to be published. On May 14 at 3:30 pm, an officer noticed Jaber riding his bicycle in Tel Aviv and shouted at him, prompting the suspect to flee the scene. He later fell off his bicycle but again managed to escape to a side street. Another officer noticed the defendant several hours later.

The rape took place two weeks ago when the complainant and her boyfriend arrived at a parking lot adjacent to the Tel Aviv municipality building where their car was parked at 4 am. The suspect ambushed the two and threatened them with a blunt object, forcing them into a nearby public bathroom, where he allegedly forced them to have sex, and then raped the woman himself.

At his first remand hearing the suspect denied the allegations and claimed he had only stolen the couple's cell phones.