Hundreds of art lovers and collectors descended on the Betzalel Art Gallery in the Crown Heights neighborhood of Brooklyn, New York earlier this month for its inaugural art exhibition displaying the drawings of renowned Jewish artist Itshak Holtz.

According to the Jewish Voice, the crowd represented the full spectrum of New York’s orthodox community. Satmar Hassidim from Williamsburg, Modern Orthodox Jews from Long Island and Lubavitchers from Crown Heights all came to admire the paintings and the new gallery.

Nachman Hellman of Monsey, who was among the attendees, has been a Jewish art collector for fifteen years and loaned two of his Holtz pieces to the gallery for the exhibition. Hellman complimented the design of the gallery saying, “I Believe this will be the most prestigious Judaic art gallery in the US. It really takes Jewish art to the next level.”

The star of the evening was unquestionably the artist himself, Itshak Holtz. His drawings and watercolors hanging on the walls captured scenes spanning a lifetime of Jewish history and change. His earliest painting on display was drawn in 1962 and the most recent – half a century later in 2012. 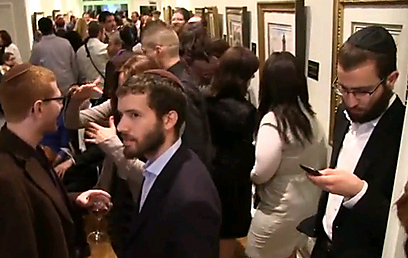 Holtz's love for art and his artistic proficiency grew as he studied first in the Bezalel Art School in Jerusalem where his family moved before the Second World War, and then in New York where he further mastered his craft. But to Itshak Holtz, his craft has always been more than just technique and colors. As a deeply religious orthodox Jew, he seeks to depict scenes of Jewish spirituality and tradition. This drive has brought him back to Jerusalem time and again where he paints for months at a time. The winding streets of Jerusalem and Safed, the interiors of synagogues and shops, old men and women, are all transformed by his brush. “You have to live the religious life to fully capture it on canvas,” Holtz explained. The operators behind the gallery are businessman Dovy Andrusier and Boro Park art dealer Shmuel Pultman. “Art has been my long time hobby. This is taking my hobby to the next level,” explained Andrusier. “I believe Crown Heights is ready for a place like this and I believe the Jewish art world is ready.”

Pultman has been at the forefront of the meteoric rise of Hassidic art. “Twenty years ago, the most a Judaic artist was able to command for a painting was $20,000-$30,000. The Betzalel Gallery’s most expensive painting has an asking price of $175,000 although there are also paintings starting from $3,000," said Pultman.