Israeli archaeologists have discovered a rare trove of 3,000-year-old jewelry, including a ring and earrings, hidden in a ceramic jug near the ancient city of Megiddo, where the New Testament predicts the final battle of Armageddon.

Archaeologists who unearthed the jug during excavations at the site in 2010 left it in a laboratory while they waited for a molecular analysis of what was inside. When they were finally able to clean it, pieces of gold jewelry – a ring, earrings, and beads – dating to around 1,100 BC poured out.
Lost Books
Stolen Torah scrolls discovered in Safed
Maor Buchnik
Boys playing in abandoned house find six stolen Torah scrolls. Books estimated at hundreds thousands of shekels
Stolen Torah scrolls discovered in Safed
Israel Finkelstein of Tel Aviv University, who co-directed the dig, said that the find offers a rare glimpse into ancient Canaanite high society. He said the fact that the jewelry was found inside the jug suggested that the owner hid them there.

Finkelstein said the jewelry likely belonged to a Canaanite family. "We can guess that it was a rich family, probably belonging to the ruling elite," he said. 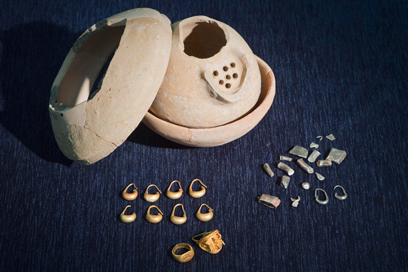 Tel Aviv University called the trove "among the most valuable ever found from the Biblical period," adding that one piece in particular, a gold earring decorated with molded ibexes, or wild goats, is "without parallel." It said in a statement this week that the objects were either owned by Egyptians living in the area or inspired by the Egyptian style of the period. Aren Maeir, an archaeologist at Bar Ilan University, said that because the raw materials used are not from the area, the find "tells us about international relations ... and about technical traditions used at the time."

Megiddo was an important trade center in ancient times. According to the New Testament, Megiddo will be the site of the final apocalyptic battle between good and evil.