France not ruling out military action in Syria

President Hollande says will try to convince Russia to back UN sanctions against Syria, says military action possible but only if backed by Security Council resolution. US, Russia oppose step

French President Francois Hollande said on Tuesday he would try to convince Russia's Vladimir Putin to back Security Council sanctions against Syria, and said military action could be possible but only if it was backed by a UN resolution.

France joined the United States, Australia, Britain, Canada, Germany, Italy and Spain in expelling heads of Syrian diplomatic missions in a coordinated move in response to last week's killing of at least 108 people in the town of Houla.

The crisis in Syria is one of the first diplomatic tests for Hollande after predecessor Nicolas Sarkozy's high-profile role in last year's crises in Libya and Ivory Coast. Hollande will meet Putin in Paris on Friday.

"It is not possible to allow Bashar Assad's regime to massacre its own people," Hollande told France 2 television, referring to Syria's president.

"Military intervention is not excluded provided it is carried out under the auspices of international law, namely via a (UN) Security Council resolution."

Bodies of children murdered in Houla

Hollande said Moscow and Beijing were the main obstacle to the adoption of stronger sanctions against Assad's government.

"It is down to myself and others to convince Russia and China, and also to find a solution which is not necessarily a military one," said Hollande. "We should find another solution."

Under Sarkozy, France called repeatedly for Assad to step aside and urged a UN resolution that could include the threat of military force unless Damascus complied with a UN-Arab league peace plan.

Hollande and British Prime Minister David Cameron discussed Syria on Monday, condemning the Houla killings. They agreed to work together to raise pressure on Damascus.

"We are putting pressure on Syria given what its leader is doing to crush his people. Sadly, we saw a most terrible demonstration of this (in Houla) with children losing their lives in atrocious conditions," Hollande said. "We had to react." 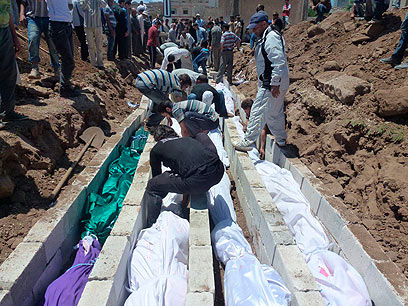 Western and Arab states have been struggling to craft a more muscular international response to the crisis amid opposition from Russia and China, both permanent members of the UN Security Council, who have already vetoed two resolutions.

Hollande said he still supported a peace plan led by UN envoy Kofi Annan. But he also said France would stage a meeting in Paris by early July of the Friends of Syria - a coalition of countries that want Assad's rule to end.

Speaking in daily newspaper Le Monde, Foreign Minister Laurent Fabius ruled out a ground intervention but, when asked by reporters if an aerial intervention was a possibility, he declined to comment.

US remains opposed to military action

Meanwhile, both the US and Russia said they were opposed to military action, despite the Houla massacre.

The nation's top military officer, Joint Chiefs of Staff Chairman Gen. Martin Dempsey, had appeared to hint at a possible shift in that longstanding US position, saying Monday that despite reservations about military intervention "it may come to a point with Syria," because of the mounting atrocities.

Pentagon spokesman George Little said Tuesday that those remarks did not mean the United States had backed off its position that military intervention risks doing more harm than good. The Pentagon has not been asked to provide plans for military options in Syria, Little said.

"The focus remains on the diplomatic and economic track," Little said. "But at the end of the day, we in the Department of Defense have a responsibility to look at the full spectrum of options and to make them available if they're requested."

"Right now, our focus is on humanitarian aid, non-lethal aid, and I'm not going to speculate as to where the future might take us," Little said.

Russia, on its part, said that the UN Security Council should not consider new measures to resolve the crisis in Syria at this point and signaled it would block any effort to authorize military intervention, the Interfax news agency reported.

Russia supported a non-binding UN Security Council statement on Sunday that strongly condemned the killing of more than 100 civilians in the Syrian town of Houla, criticized the government for using heavy weapons against population centers and called on the government and its foes to end the violence.

That statement was "a strong enough signal to the Syrian sides and a sufficient reaction by the council to the latest developments," Russian Deputy Foreign Minister Gennady Gatilov said, according to Interfax.

"We believe consideration in the Security Council of any new measures to influence the situation now would be premature," said Gatilov, whose country has twice vetoed Western-backed council resolutions condemning President Bashar Assad's government over 15 months of bloodshed.

Commenting on Hollande's remark, Gatilov said Russia "categorically opposes any external intervention in the Syrian conflict, as it would only aggravate the situation with unpredictable consequences for Syria and the entire region."