Arab rapper says crime pollution in mixed Arab-Jewish city of Lod 'hits everybody; nobody has immunity.' Head of City Without Violence initiative: When Arabs start to move into Jewish neighborhood, Jews start to move out

"My friend is on the floor, dying, 11 holes in his body, and I only have 10 fingers," raps Tamer Nafar. "Don't close your eyes, blink if you can hear me."

Nafar isn't rapping about violence and crime in urban America, but murders, drugs, guns and gang warfare in his own Israeli slum. The backstreets of Lod, a mixed Arab-Jewish city just 20 minutes from the tree-lined boulevards of Tel Aviv, reveal a seamy underside of Israel that few visitors get to see, tucked away behind Ben Gurion airport off the main highway to Jerusalem.

"There's crime pollution in this city that hits everybody. Nobody has immunity," said Nafar, lead MC in the Arab group DAM.

Residents, police, government officials, academics and social workers agree conditions in the areas where Arabs live have reached a crisis point, with poor schools and infrastructure fuelling crime and drug abuse. Arab residents and analysts say that Israel's government and the police have ignored the problem because it has stayed within the Arab community and the country's Jewish population is largely unaffected. But awareness is growing, partly thanks to wider public appeals from the communities themselves. Prime Minister Benjamin Netanyahu told a special Knesset meeting in mid-February organized by Arab parliamentarian Ahmed Tibi that statistics showing that 40% of Arab Israelis felt threatened were "intolerable". "‎The lives of Israeli Arabs are insufferable as a result of crime, murder, the killing of women, murder in general, robbery and looting," Netanyahu said. Out of a total population of 7.8 million in Israel, 1.6 million – 20% - are Arabs. Many live in Nazareth and Arab villages located mostly in the north of Israel and in so-called mixed cities such Acre, Lod, Ramle, Haifa and Jaffa. Most are descendants of Palestinians who stayed on after the 1948 war to establish Israel in which hundreds of thousands of Palestinians fled or were driven out. Many Arabs feel kinship with Palestinians in the Israeli-occupied West Bank, and Jewish rightwingers say many Arabs are disloyal to the state. Most Arabs are exempt from service in Israel's conscript military forces, which is compulsory for Jews, and they are barely integrated into the local economy. The government estimates that just over 50% of Arab families live under the poverty line. Truly mixed Jewish-Arab neighborhoods are increasingly hard to find as Jews, often with government support, move out to more affluent neighborhoods, creating Arab ghettoes and exacerbating the feeling among Arabs that they are second-class citizens. Dor Shaulov, a project manager at City Without Violence, a government-funded initiative aimed at reducing violence in urban areas, said Arabs tend to be in favor of mixed communities while Jews preferred to stay separate. "When Arabs start to move in a Jewish neighborhood, the Jews start to move out," Shaulov said. 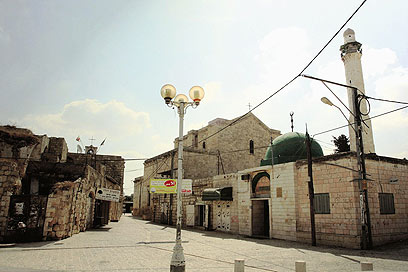 "Since 1948, there has not been one governmental housing plan in the Arab neighborhoods of Lod ... even though there have been hundreds of plans for Jews," said Faten Zinati, a municipal government employee who works in Lod. As a result, she explains, Arabs have been forced to build homes without permits, many of which have been demolished, and the rest are under threat of demolition. The result is that today, "the Arab neighborhoods are neglected, dirty and disordered," she said. Out of 141 murders last year in Israel, 62 were committed in the Arab sector, according to the latest figures cited by Public Security Minister Yitzhak Aharonovich in the Knesset. Some 30% of the prison population is Arab, and 68% of all gunfire incidents involve Arabs, he said. In Lod, where about a third of the population is Arab, most crime involves Arabs against Arabs. Residents and observers say lack of adequate policing in Arab areas is a big part of the problem. "The majority of the drug dealers are Arabs stationed in the Arab parts of the city, and the violent crime victims are mostly Arab too," said Mahmoud Mohareb, a professor of Israeli studies at Al Quds University. "There is no police seriousness when it comes to investigating crimes committed between Arabs," Mohareb said. 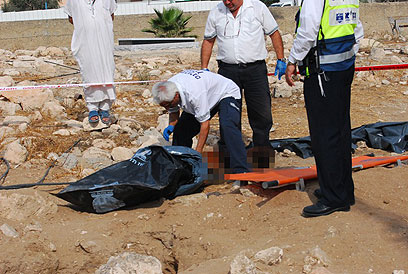 Woman's body found in Lod cemetery (Archive photo: Panet)
Police defend their record and point to success in cleaning up the drugs scene. They reckon up to 1,500 drug users a day bought narcotics in Lod's Arab "Mahata" neighborhood two years ago using "ATM's" -- holes in the walls that supplied heroin and crack cocaine -- a trade that is almost nonexistent today. "It was like a market place, but for drugs and drug users," said resident Amer Zawarkeh. Violence continues, the police agree, but they say the problem is due to "tribalism" in the communities. A third of Lod's Arab population are tribal Bedouins, who began migrating to the city in the 1950s in search of work. Israel's Police Commissioner, Yohanan ‎Danino, agreed the rate of crime solving in the Arab community is low and needed to be improved. More Arabic-speaking officers is one solution, but he said getting the full cooperation of the Arab community would be key. Crammed into decrepit tenement-style flats, many homes in the Arab parts remain under threat of demolition. A study by the Israeli rights group Shatil estimates that some 70% of Arab homes in Lod lack legal permits, which are hard to obtain. In their neighborhoods, the streets have no names, the houses have no numbers and GPS tracking systems go blank. There are no paved roads and rubbish is strewn everywhere. Municipal services such as street lighting and rubbish collection stop at the boundaries of their quarters. "The only way to fix this neighborhood is to destroy it entirely and let us build new houses, with permits," said resident Zawarkeh. In March 2011, Human Rights Watch put out a report called "Israel: Stop Discriminatory Home Demolitions" in which the group criticized the practice of demolishing homes in Arab communities built without permits when getting permits was so hard. "When it comes to housing rights in Lod, Israeli officials seem to have one rule for Palestinian citizens, another for Jewish citizens," Sarah Leah Whitson, Middle East director at Human Rights Watch, said in a statement. Israel's government has earmarked about 172 million shekels ($46 million) for a number of improvement schemes. But Netanyahu and his cabinet argue local policing, housing and infrastructure are just part of the overall problem. The Knesset meeting on the problem was a landmark event, participants said. "This is the first time that the Arab sector has cried out for help and wants the police to enter the towns and cities," Netanyahu said at the meeting. "Arab MKs (members of Knesset) have told me: 'we are in distress'."

"The principal solution is the integration of Israeli Arabs in the economy and education," he said. "Simultaneously, action needs to be taken in the field of law enforcement."

City Without Violence's Shaulov says that in Lod, unlike other cities in his scheme, even small changes such as picking up the trash in Mahata neighborhood made a big impression. Locals were awed by the installation of street lighting in a district that for years was pitch black at night. "There was an inequality in the allotment of funding," Shaulov said. "Now, we aim to spend more on the Arab side in order to make up for the past. "It's horrible now, but it was a disaster before."