In an interview with Germany's 'Bild' newspaper on Tuesday Prime Minister Benjamin Netanyahu stressed the importance of Germany's aid to the security of the State of Israel and focused on regional issues. When asked about the German perception of Israel where Only 36% of Germans find Israel sympathetic and only 21% believe that Israel is respecting human rights, Netanyahu said that he believes there is "a vast misperception of Israel in Germany and in Western European society in general."

He claimed that Israel is maligned on a daily basis which is "particularly unfortunate" when taking the "unique relationship and unique history" that Israel has with Germany. 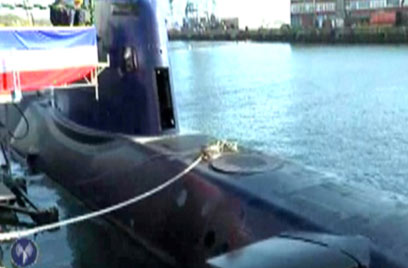 The new Dolphin submarine (Photo: IDF Spokesman)
He added: "We are a vibrant democracy faced with Iran and its violent proxies, defending itself against thousands of rockets and Islamist convulsions all around us. It is the only democracy, the only beacon of freedom, of human rights in this region. "How many Germans know there are over a million Arab citizens in Israel who enjoy full civic rights? The only Arabs out of hundreds of millions in the Middle East who are guaranteed absolute rule of law by impartial courts." Netanyahu noted that "People were willing to believe anything about the Jews, that we were poisoning the wells, drinking the blood of Christian children. And the unfortunate thing is that the slanders that were once reserved for the Jewish people are now directed at the state of the Jewish people." Netanyahu also lauded Germany's commitment to Israel's security: "There is a commitment to Israel’s security that is exemplified by the recent sale of another German submarine, an important adjunct to our national security."

When asked how important the submarines were to Israel, Netanyahu's unequivocal response was "very important!" Yet he also stressed that Israel had not asked "other countries to come and physically defend us." 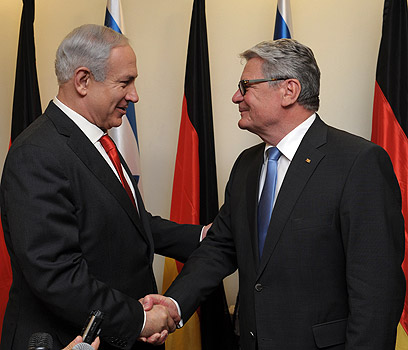 "In fact," he noted, "one of the great transformations in the reconstitution of the Jewish state is the regaining by the Jewish people of the ability to defend ourselves by ourselves against any threat.

"It’s a main principle of our security policy… the most important assistance that can be given to Israel is – to paraphrase Churchill – to give us the tools and we will do the job of defending ourselves."

The interview then moved on to review the recent uprisings and changes in the regional political arena. Netanyahu said that he expected that "Germany and all other governments make it clear that any government elected in Egypt should continue to honor the Israeli-Egyptian peace treaty."

Claiming "I think that is a vital interest of both peoples. The Israeli-Egyptian peace has been the anchor of peace for over thirty years in the heart of the Middle East." Asked if he believed the west should intervene is Syria following the Houla massacre the prime minister noted "what is happening in Syria is awful, it is wholesale murder. And you have to understand who is supporting this brutality, this butchery – it is Iran and Hizbollah. "What we are facing is illegitimate regimes that are pursuing illegitimate goals with illegitimate means. They are committing war crimes left and right. This has to be stopped. It should not only be condemned, it must be stopped." But he added: "The less I say as Prime Minister of Israel, the better. The more I speak about it, I will be causing damage to the people we want to help." As for the possibility of war with Iran, Netanyahu said that Israel "certainly would prefer that all these economic sanctions produce a result." Yet he claimed that as "the Iranians were only asked to stop 20 percent enrichment of uranium. That doesn’t stop their nuclear program in any way. It actually allows them to continue their nuclear program."