Deputy FM Ayalon, head of US anti-terror bureau meet, agree that experts should convene regularly. Russian whose lab exposed Flame virus tells Tel Aviv conference: Cyber terror can lead to 'end of the world as we know it'

The US and Israel have agreed to boost their cooperation in the field of cyber warfare, the Yedioth Ahronoth daily reported Thursday.

Meanwhile, a Russian information security expert whose lab exposed the Flame virus, which has attacked computers in Iran and elsewhere in the Middle East, said on Wednesday that only a global effort could stop a new era of “cyber terrorism.”

"It’s not cyber warfare, it’s cyber terrorism and I’m afraid it’s just the beginning of the game ... I’m afraid it will be the end of the world as we know it," Eugene Kaspersky told reporters at a cyber-security conference in Tel Aviv. "I’m scared, believe me," he said. "Flame is extremely complicated but I think many countries can do the same or very similar, even countries that don’t have enough of the expertise at the moment. They can employ engineers or kidnap them, or employ 'hacktivists,'" Kaspersky argued. "These ideas are spreading too fast," he added, "That cyber boomerang may get back to you." 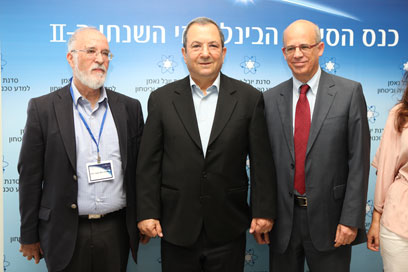 Defense Minister Ehud Barak told the conference that a more comprehensive approach was necessary to deal with cyber threats and it required cooperation on an international level.

"Our goal with cyber defense, which is the more important and difficult component, is to prevent damage," Barak said. "It is more than we can benefit from an offensive action, even though both aspects exist."

The defense minister all but admitted that Israel was extensively involved in the development of cyber warfare technologies.

"We are preparing to be at the frontline of the worldwide cyber battle, both in civil and security systems," he said.

News of the Flame virus surfaced last week. Researchers said technical evidence suggests it was built for the same nation or nations that commissioned the Stuxnet worm that attacked Iran's nuclear program in 2010.

In recent months US officials have become more open about the work of the United States and Israel on Stuxnet, which targeted Iran’s Natanz nuclear enrichment facility.

The West suspects Iran is developing atomic weapons. Tehran denies this and says it is enriching uranium only for civilian use. Security experts say Flame is one of the most sophisticated pieces of malicious software so far discovered. They are still investigating the virus, which they believe was released specifically to infect computers in Iran and across the Middle East. Kaspersky named the United States, Britain, Israel, China, Russia and possibly India, Japan and Romania as countries with the ability to develop such software, but stopped short of saying which nation he thought was behind Flame. When asked whether Israel was part of the solution or part of the problem regarding cyber war, Kaspersky said: “Both.”