Annan: Syria crisis will soon spiral out of control

International envoy Kofi Annan warned Thursday that Syria is drifting toward full-blown civil war and blamed the failure of his peace plan primarily on President Bashar Assad's government. He urged the divided UN Security Council to threaten "consequences" if Assad doesn't stop the violence, adding that the crisis will soon spiral out of control.

Increasingly impatient with the Syrian regime, Annan confirmed for the first time that his six-point plan is not being implemented. He said it's now time for the UN's most powerful body and the wider international community to step up the pressure to ensure its implementation or start discussing other options to stop the bloodshed.

Annan spoke amid dire signs that diplomatic efforts to end the conflict are failing: UN observers came under fire Thursday as they tried to reach the site of the latest reported mass killing in Syria – about 80 people, including women and children who were shot or stabbed.

Adding to concern about the unarmed observers, UN Secretary-General Ban Ki-moon told the Security Council that UN patrols in Syria have been regularly obstructed and in some cases deliberately targeted, citing examples where a heavy weapon, armor-piercing ammunition, and a surveillance drone were used, a senior UN official said.

Annan, the joint UN-Arab League envoy, urged the Security Council to make clear that there will be "consequences" – usually code for sanctions – if his peace plan is not fully implemented.

"Clearly, the time has come to determine what more can be done to secure implementation of the plan," Annan said. "We must also chart a clearer course for a peaceful transition, if we are to help the government and opposition, as well as Syrian society, to help resolve the crisis."

In a sign of increasing global concern at the escalating Syrian conflict, Annan, Ban and Arab League

Secretary-General Nabil  addressed an open meeting of the UN General Assembly in the morning and spent three hours behind closed doors with the Security Council in the afternoon discussing how to get the Syrian government to implement the Annan plan.

"It is up to the Security Council to take action now," ElAraby told reporters.

The message from Arab nations is that the UN's most powerful body should impose nonmilitary sanctions against Syria, which has been suspended from the organization, he said. 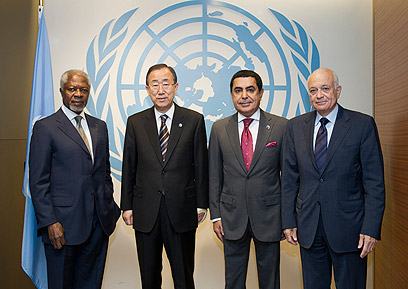 From left: Annan, Ban, Al-Nasser and ElAraby at UN

The US and its European allies have tried unsuccessfully for months to threaten sanctions against Syria as the death toll has risen. But Russia and China, Syria's main allies, vetoed two Security Council resolutions that threatened possible sanctions, and they indicated their continuing opposition in a joint statement after a summit in Beijing on Wednesday. The statement also opposed any outside military interference or forceful imposition of "regime change" in Syria.

Nonetheless, Britain's UN Ambassador Mark Lyall Grant said it was time to try to adopt a new UN resolution "with clear time lines for sanctions in the event of non-compliance."

Russia's UN Ambassador Vitaly Churkin told reporters that the Syrian government hasn't complied with all provisions in the Annan plan but there have been "encouraging developments" including an agreement to allow in humanitarian agencies. He accused the armed opposition of not only failing to comply with the Annan plan but declaring their intention not to do so, which he called "a very dangerous development."

Annan said the international community had united behind his peace plan "but it now must take that unity to a new level" and "act as one."

Otherwise, he said, Syria will likely face a future of "brutal repression, massacres, sectarian violence, and even all-out civil war."

In his briefing to the General Assembly, Annan said he told Assad nine days ago in Damascus that he wasn't implementing the peace plan and strongly urged him "to take bold and visible steps to now radically change his military posture."

Annan said Assad called militants the main obstacle, but he told diplomats that while all parties must cease violence, "the first responsibility lies with the government."

Since his visit, Annan said "shelling of cities has intensified, government-backed militia seem to have free rein with appalling consequences ... and president Assad has not indicated a change of course."

Syria's UN Ambassador Bashar Ja'afari insisted, however, that "the government of Syria has spared no efforts to implement its part of the Kofi Annan plan." He said an unjustifiable massacre is taking place in his country but insisted the government is not responsible.

At the start of the General Assembly meeting, assembly President Nassir Abdulaziz Al-Nasser asked the 193-member world body to observe a minute of silence for Syrians killed in the latest massacres.

Annan expressed "horror and condemnation" at the new massacre and demanded that the perpetrators be held accountable saying: "We cannot allow mass killing to become part of everyday reality in Syria."

Calling reports of another massacre "shocking and sickening," Ban said "each day seems to bring new additions to the grim catalog of atrocities."

He said it has been evident for many months that Assad and his government "have lost all legitimacy," adding that "any regime or leader that tolerates such killing of innocents has lost its fundamental humanity."

The UN chief backed Annan's call for unity, saying the international community must recognize that the inability of the government or opposition to engage in political dialogue "makes the prognosis extremely grave."