Violent response to government's decision to evacuate Ulpana: Unknown vandals punctured the tires of 14 parked cars in Neve Shalom Friday morning. The words "revenge," "death to Arabs" and "regards from Ulpana" were spray-pained on the vehicles.

Neve Shalom is a cooperative village that was jointly founded in 1969 by Israeli Jews and Arabs to promote coexistence. It is located about seven kilometers (4.3 miles) north of Beit Shemesh.

The vandals also spray-painted the words "regards from Havat Gilad" and "revenge" on the wall of a local elementary school. Havat Gilad is a Jewish outpost in the West Bank.

Police have launched on investigation. 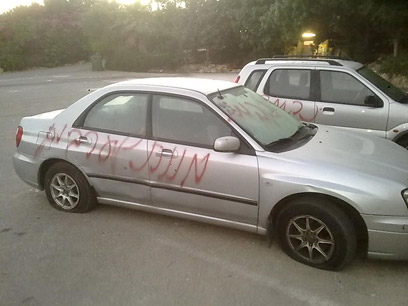 'Death to Arabs' on car in Neve Shalom, Friday 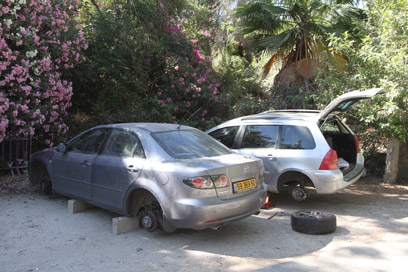 "We are trying to promote peace and coexistence, and what happened here was a political act aimed at shattering this (initiative)," he said.

Anwar Dawod, headmaster of the village’s binational, bilingual, multicultural Oasis of Peace Primary School, said "(Authorities) must not wait until someone is killed before they decide to act. The writing is on the wall, and it indicates intense hatred.

Earlier this week the Knesset voted to uphold a High Court ruling ordering the State to evacuate five homes in Ulpana, a neighborhood in the West Bank settlement of Beit El, because they were built on private Palestinian land. 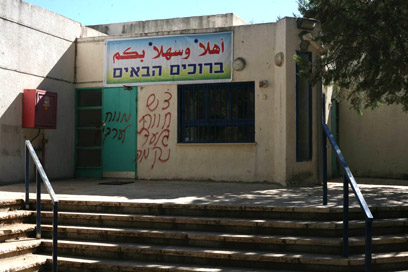 Following the vote, rightists demonstrated at the entrance to Jerusalem and burned tires. Meanwhile, dozens of teenagers threw stones at cars travelling along a road near Havat Gilad and clashed with Border Guard officers.

The teens, who were also protesting the decision to evacuate homes in Ulpana, set fire to a nearby field before security forces dispersed them using stun grenades.

"I hope this incident will not stir fear among the residents. We'll erase the slogans, but the stain will remain on the wall. Despite what happened, we'll continue with our project. The school is a symbol of coexistence to all those who believe in peace," he said.

Neve Shalom resident Michal Zak (52) said, "We've lived here for more than 30 years. Such incidents won't deter us. On the contrary, they only increase the need to (promote peace).

"We must keep in mind that today's incident is merely a spillover from the daily violence in the occupied territories. What happened here is a call for violence and the killing of civilians," she claimed.