Hundreds mark 45 years to occupation of Palestinian territories, claim social justice cannot be achieved as long as millions of Palestinians are being oppressed

Some 1,000 members of leftist organizations held a protest march against the occupation of Palestinian territories in Tel Aviv on Saturday.

Held under the banner "No social justice as long as the occupation persists" the protest marked 45 years to the occupation of Palestinian territories. Among the groups that took part in the event were The Coalition of Women for Peace, Yesh Gvul, Hadash and Balad.

The protesters carried signs which read "45 years of occupation, this stain cannot be wiped off" and "The people demand social justice and an end to the occupation and apartheid." They chanted "End the occupation" and "We want peace, we must fight."

"Our aim is to remind the Israeli public that the state has been controlling millions of Palestinians against their will and through the use of force for two thirds of its existence," said Gush Shalom spokesman Adam Keller. "All settlements, not just the Ulpana homes, are illegal." 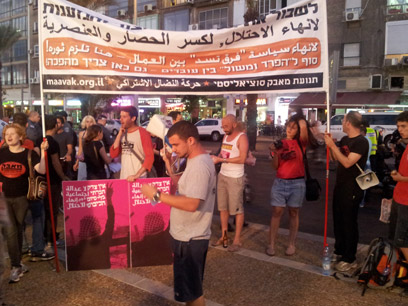 He added, "We also want to say that social justice is not possible in this country as long as millions are oppressed and as long as inflated funds are being spent on settlements and security."

One of the organizers of the event Yaakov Manor said that the occupation is no longer part of Israeli consciousness since the construction of the separation fence.

"There is a disconnect, they're there and we're here," he said. "We want to wake people up, have the public discourse focus on the occupation again and tell the leaders of the social protest that they will never achieve social justice as long as there is occupation."

Daphni Ganeni said she is taking part in the protest "because I oppose the occupation and the funding of the settlements." She said that social justice is impossible "when my money is being used to fund settlements. It's a joke blaming Strauss and Tnuva when hundreds of apartments are being funded to compensate the settlers."