US: Iran to be given 'clear path' to end nuclear impasse

At joint appearance with Peres, Clinton says during talks with Iran made it clear 'we are dealing with regime which has hegemonic ambitions'

World powers will outline to Iran a "very clear path" to resolve the impasse over its suspect nuclear program at talks in Moscow next week, US Secretary of State Hillary Clinton said Tuesday in a joint appearance with President Shimon Peres at the Saban Center for Middle East Policy in Washington.

"There is a unified position being presented by the P5+1 that gives Iran, if it is interested in taking a diplomatic way out, a very clear path that would be verifiable and would be linked to action for action," Clinton told a US think-tank.

"I am quite certain that they are under tremendous pressure from the Russians and the Chinese to come to Moscow prepared to respond. Now whether that response is adequate or not we will have to judge," she added. 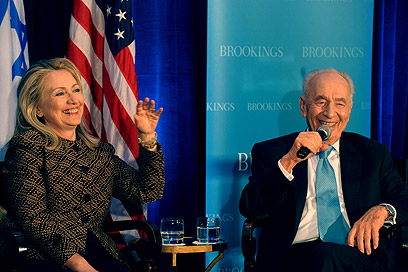 Iran's top nuclear negotiator on Tuesday confirmed an agreement had been struck with the EU official representing world powers negotiating with Tehran on the content of upcoming talks in Moscow.

Ashton had met senior officials from the so-called P5+1 group -- Britain, China, France, Russia and the United States plus Germany on Monday -- to prepare for the talks in Moscow on Tehran's contested nuclear drive.

Moscow will host a third round of negotiations on June 18-19 between Iran and the global powers that up until now have failed to yield results in efforts to curb Tehran's nuclear activities.

The Western nations in the P5+1, and the UN's International Atomic Energy Agency, suspect Iran has conducted research towards developing nuclear weapons.

Iran denies that accusation and claims it is being unfairly treated by the West under the terms of the nuclear Non-Proliferation Treaty. It says its activities are solely for peaceful purposes.

"The Russians have made it very clear that they expect the Iranians to advance the discussion in Moscow. Not just to come, listen and leave. We will know once it happens," Clinton said.

The Moscow round follows two earlier unproductive meetings since early April, in Istanbul and in Baghdad which failed to yield results in efforts to curb Tehran's nuclear activities.

Clinton said the threat posed by Iran "is real" and it was clear "we are dealing with a regime which has hegemonic ambitions."

"The continuing effort by the Iranians to extend their influence and to use terror as a tool to do so extends to our hemisphere and all the way to East Asia. So the threat is real," she added.