'They want to be women.' Michaeli
Photo: Yaniv Shaham

Rightist lawmaker slams Channel 10 programs that show 'how nice it is to be gay'; claims most homosexuals are 'miserable, eventually kill themselves'

MK Michaeli (Yisrael Beitenu), who spoke during a session of the Knesset's Committee on the Status of Women, slammed Channel 10 for featuring programs that show "how nice it is to be gay," and added: "They are miserable, these homosexuals… Eventually they commit suicide at the age of 40." 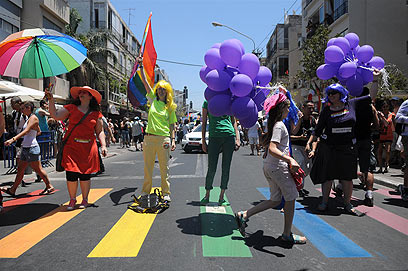 The rightist lawmaker questioned Channel 10's "right to air such programs - which my children (could be watching). How fun it is to put on make-up and wear skirts. These are the same people who want to be women.

"In these shows the homosexual's mother is interviewed and says how miserable she is and that she is divorced from her husband. I want to ask what the (homosexual) went through when he was three years old and why (the parents) are divorced," she told the committee.

"I think most homosexuals are people who experienced sexual abuse at a very young age, and things deteriorated from there," the MK said.

Yisrael Beiteinu issued a statement disassociating the party from Michaeli's comments about homosexuals. "Michaeli's statements are her own opinion and do not represent the party," the statement read.

Michaeli's comments drew harsh criticism from several lawmakers and organizations. MK Ilan Gilon, from the leftist Meretz party, said the Knesset cannot accept "homophobic remarks" and called on the Yisrael Beitenu lawmaker to "delve into her own past."

"MK Michaeli is originally from St. Petersburg, which recently passed an illiberal law that forbids any public expression of homosexuality, so maybe it's possible to understand where the legislator's (opinions) come from," said the MK, who chairs the Lobby for the Struggle Against Homophobia.

Israel Gay Youth director Avner Dafni said he was "shocked that in 2012 there remain public officials who express themselves in such an archaic and dangerous manner. Such comments can push homosexual teens to the brink of suicide."

In January Michaeli was suspended from the Knesset plenum for a month after she threw water on MK Ghaleb Majadele's face during an Education, Culture and Sports Committee meeting.

"Majadele will learn not to insult women. He hurt the honor of the Knesset and of this place," Michaeli said afterwards.

A confrontation broke out between Arab MKs and Michaeli after the latter spoke against a school principal who decided to take his students to a human rights march in the Arab town of Arara in the Galilee.