Romney says he'll do opposite of Obama on Israel

WASHINGTON - Mitt Romney told evangelical Christians that he'll do "the opposite" of what President Obama has done in dealing with Israel.

Romney on Saturday told the Faith and Freedom Coalition he believes the president is more concerned about Israel attacking Iran than he is about Iran obtaining a nuclear weapon.

His hawkish speech was the first time he's discussed policy toward Israel at length since becoming the likely Republican presidential nominee.

"It is unacceptable for Iran to become a nuclear nation and that we're prepared to take any and all action necessary to keep that from happening." 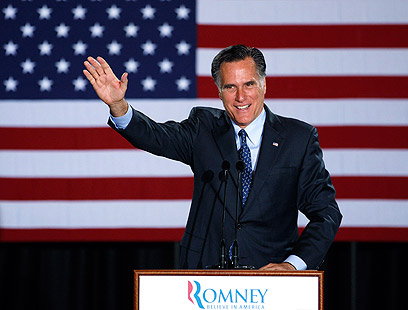 Romney. Vows to do opposite of Obama (Photo: AP)

Asked about the president's attitude towards Israel, the Republican presidential hopeful said: "Well, I think by in large you could just look at the things the president's done and do the opposite. You consider his first address to the United Nations he castigated Israel for building settlements."

Romney described the 1967 borders as "indefensible" and noted that Obama has been "disrespectful of Prime Minister Netanyahu."

He stressed that if elected, his administration would "forge a strong working relationship with the leadership in Israel."

"I would not want to show a dime's worth of distance between ourselves and our allies like Israel. If we have disagreements, we can talk about them, you know, behind closed doors. But to the world, you show that we're locked arm in arm. Romney also criticized the White House for its handling of the crackdown in Syria. "Instead of watching what's happening in Syria from a dispassionate distance, I would be leading in Syria by encouraging our friends there like the Turks and the Saudis to prove weapons to the insurgents in Syria," he said.

Obama's campaign accused Romney of distorting the president's record on Israel. Spokesman Ben LaBolt says Obama has given Israel more security assistance than any other administration and has stood with Israel at the United Nations.

Romney addressed the group via video uplink from outside his campaign bus as he campaigned in Pennsylvania.