First she cried, then she fired
Photo: Alex Kolomoisky

Summer camp, warfare style: Like a frozen turkey plunged into boiling oil, a group of American tourists descend from an air-conditioned van into the scorching heat of the West Bank. Flashing smiles all around, they march into Caliber 3, a local shooting range.

"Move it!" the Israeli guide suddenly yells. "Destroy that terrorist," he orders them, and they charge, guns loaded, at cardboard targets.

Gush Etzion has become a hot destination in recent months for tourists seeking an Israeli experience like no other: The opportunity to pretend-shoot a terror operative. Residents of the nearby settlements, who run the site, offer day-trippers a chance to hear stories from the battleground, watch a simulated assassination of terrorists by guards, and fire weapons at the range. 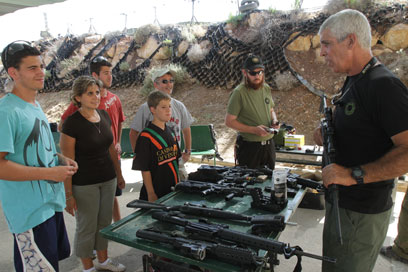 Three seconds to take terrorist down (Photo: Alex Kolomoisky)
The fact that the tourist attraction is located beyond the Green Line only intensifies the thrill for the visitors, who often appear disappointed when told by their guides that they are not in any danger.

Shay, a gray-haired guide with a throaty voice, demonstrates the best way to grab hold of an assailant, while shots sound in the nearby range. A variety of rifles and faux explosive belts lay on a desk in front of him, while the pictures of smiling "terrorist" targets line the walls.

"Grab me," he orders 19-year-old Michael, who finds himself on the ground within moments of touching his muscular instructor. According to reports in the foreign media, Shay was one of the combat troops who took part in Operation Entebbe, the mission that rescued the passengers of a hijacked Air France flight in 1976. When the tourists hear about it, their eyes light up. "Suppose that the terrorist in front of me has an automatic weapon," Shay tells the captivated audience. "He can spray a cartridge within 2.8 seconds, which means I have less than three seconds to take him down. And that is what I will do." He turns around and lodges a bullet in each target, prompting loud cheers all around. But the tourists don’t come out all the way to Gush Etzion for a lecture; they want to push the trigger as well. Shay hands a dummy gun to the 14-year-old Brian, who excitedly blurts out, "Jesus!" "Your mommy won't be here to protect you, so stand up like a man," Shay yells at the teen. "Are you ready to take out a terrorist?" "Yes I am," Brian retorts. One by one, the combatants-for-a-day don protective glasses and approach their Tavor or M16 rifles.

Michel Brown, 40, a Miami banker, chose to take his wife and three children to the range with the purpose of "teaching them values." 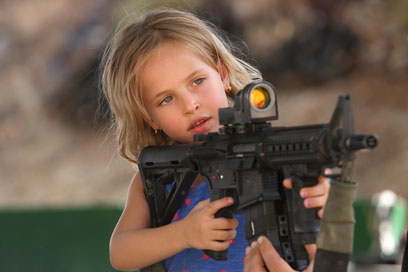 They should know where they come from (Photo: Alex Kolomoisky)
Upon entering the range, his five-year-old daughter, Tamara, bursts into tears. A half hour later, she is holding a gun and shooting clay bullets like a pro. "This is part of their education," Michel says as he proudly watches his daughter. "They should know where they come from and also feel some action." Sharon Gat, the range's manager, says all the instructors at the site have served in elite IDF units. "This is a special program created due to popular demand," he says. "Travelers from all over the world come here to meet former combat troops and hear stories about elite units. It's a once-in-a-lifetime experience." "We heard on the news about shootings in the West Bank," the mother, Olga, says. "We came to see it in person." Her son, Jacob, 24, puts down his rifle and exclaims: "This is an awesome experience. I learned how to stop a terrorist and how to rescue hostages. Now, when I find myself in distress, I will know how to deal."

Davidi Pearl, who heads the Gush Etzion Regional Council, notes that this kind of experience turns the district into a world-famous "tourist gem."

At the end of the thrill-filled day, the tourists get a diploma indicating they "completed a basic shooting course in Israel." "Boom, boom," the 13-year-old Riley mutters on the way out of the range.