According to the report, Haniyeh said he was praying for stability and security in Egypt. He also urged the Arab country to curb the "Israeli aggression."

Haniyeh, it was reported, denied Israel's claim that Hamas was behind the recent rocket attacks emanating from the Egyptian-controlled Sinai Peninsula, saying the allegations were merely "an excuse" to attack Gaza.

Israeli aircraft bombed a number of targets in Gaza on Monday, killing four Palestinian terrorists. The strikes came after terrorists attacked defense contractor crews building the new security fence along the Israel-Egypt border. The attack claimed the life of Said Phashpashe, 36, from Haifa. Israeli officials posited that Palestinian terrorists from Gaza carried out the attack. Egypt’s agonized passage from revolution to democracy was in limbo on Monday, as the Muslim Brotherhood claimed victory in a presidential election while the generals who took over from Hosni Mubarak decreed it was they who would keep most power.

The former air force commander running against the Islamist dismissed Morsy’s self-declared triumph as a bid to “hijack” the election. Ahmed Shafik, who was also Mubarak’s last prime minister, said that it was he in fact who was ahead.

As a day of counting, and mutual jibes over violations, wore on, there was no official word on how the two-day run-off went and electoral supervisors warned they may not publish any result until Thursday – prolonging what for many Egyptians has become a wearisome deadlock between a military past and religious future. Shafik’s camp insisted he led by two to four points but even sources in the army, which has fought the Brotherhood through six decades of military rule, indicated they were preparing to accept that Morsy had won Egypt’s first free presidential vote.

Whoever emerges as president – and at least one electoral official privately endorsed Morsy’s claim to be leading by 52% to 48 with the bulk of votes counted – he will find his powers tightly circumscribed by a decree issued by Field Marshal Hussein Tantawi’s military council as polls closed on Sunday.

Having last week dissolved the parliament that was elected in January with a thumping Islamist majority, the Supreme Council of the Armed Forces (SCAF) said on Sunday it would now take back the assembly’s legislative powers and could also step in to break a deadlock in drafting a new constitution. 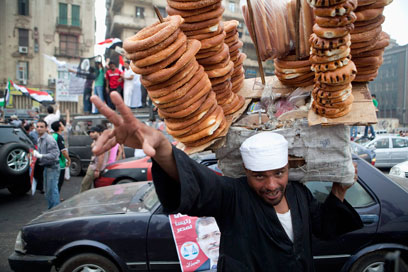 The Brotherhood, however, expressed its joy and defiance on the streets and Morsy, a 60-year-old, US-educated engineer who was a political prisoner under Mubarak, promised to be a leader of all Egyptians – a nod to the many, from Christians to secular liberals to moderate Muslims, who fear intolerant clerical rule.

“Thanks be to God who has guided Egypt’s people to the path of freedom and democracy, uniting Egyptians for a better future,” Morsy said in a victory speech to supporters in Cairo during which he forswore revenge or the settling of scores.

Upon receiving word of Morsy's "victory," Palestinians in the Gaza Strip on Monday distributed sweets, praised God and expressed hope for a new era of warm relations between Gaza and Egypt.

As the Brotherhood claimed victory early Monday in Cairo, dozens of drivers in Gaza City honked their horns and decorated their cars with Palestinian and Egyptian flags, green Hamas banners and posters of Morsi.

Hamas activists distributed sweets at the main intersections across Gaza, and loudspeakers at local mosques blared out messages of joy and victory. Shopkeepers in Gaza’s main commercial center eagerly followed the claim from Egypt.

“The news from Egypt is a great victory for all Muslims and for us in Gaza,” said Sameh Ramdan, a 23-year-old student and Hamas supporter.

Hamas spokesperson Sami Abu Zohri said the result of the Egyptian presidential election is a victory for the Egyptian people, the revolution and its martyrs, adding that Morsy’s "win" will help break the siege on Gaza and support the Palestinian cause, "particularly with regards to Jerusalem."