Escalation in south continues: One of three rockets fired by Palestinian terrorists in Gaza towards the Sdot Negev Regional Council Wednesday afternoon hit a house. No injuries were reported, but the home was damaged.

A short while later two more rockets were fired at the Sha'ar Hanegev Regional Council, but no one was hurt.

More than 20 rockets were fired towards Israel throughout the day. 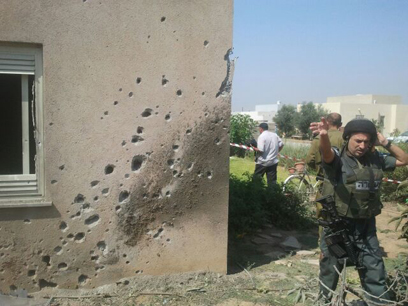 Meanwhile, sources in Gaza said a Palestinian was killed in an IDF strike east of Gaza City.

Earlier, in a joint IDF-Shin Bet operation, Israeli aircaft attacked the Gaza terror cell that orchestrated Monday's attack on the Egyptian border, Ynet reported. Direct hits were identified, and at least one terrorist was killed.

The terrorist who was killed in the attack, which took place near Rafah in the southern part of the coastal enclave, was affiliated with Islamic Jihad.

The IDF said a senior global jihad terrorist was severely wounded in the attack. The terrorist who was killed was his aide, the army reported. 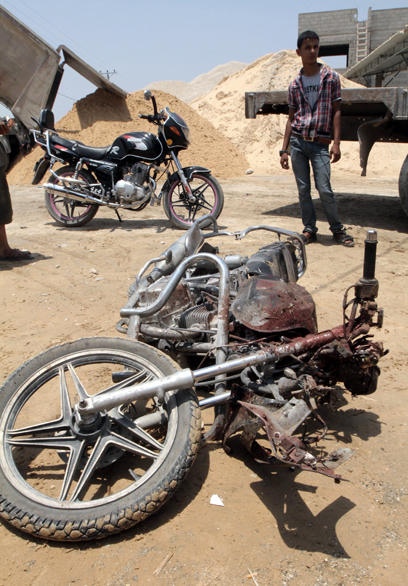 The Palestinians identified the terrorist who was killed as Raleb Armilat. They said he was hit while riding a motorcycle. Medical officials in Gaza said two people who were wounded in the Israeli strike were evacuated to a local hospital. Monday's attack on defense contractor crews building the new security fence along the Israel-Egypt border claimed the life of Said Phashpashe, 36, from Haifa. Golani Brigade soldiers who were scrambled to the scene killed two terrorists.

Shortly before 2 pm four Qassams exploded in the Sdot Negev Regional Council. No one was hurt in the attack.

At about 2:30 pm another rocket exploded in an open area in the Hof Ashkelon Regional Council. No injuries or damage were reported.

Earlier, at around noon, six Qassam rockets fired by Palestinian terrorists Gaza landed in a community within the Negev's Eshkol Regional Council. A fire broke out as a result, but there were no immediate reports of injuries. However, three women suffered from shock, and heavy damage was reported at the site.

Residents said the siren that is supposed to warn of incoming rockets was not activated.

At around 7:45 am a Qassam exploded in an open area outside Beersheba. No injuries or damage were reported. 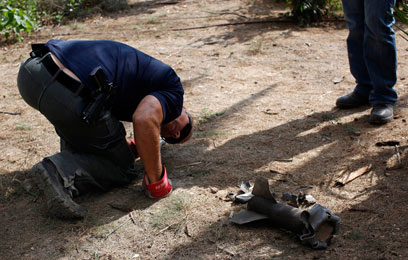 Another four rockets landed in the Eshkol Regional Council Wednesday morning. No one was hurt. One of the rockets exploded landed in one of the council's communities.

Eleven Border Guard officers were injured Tuesday night as a result of rocket fire on the Hof Ashkelon Regional Council. One officer sustained moderate shrapnel injuries, while the others were lightly hurt. While elementary schools in the Eshkol Regional Council are expected to open as usual despite the incessant rocket fire, the Ma'agalim school in the Sdot Negev Council will keep its gates closed.

"The government said it would provide us with miguniyot (cement shelter against Qassam rocket attacks), but we will be getting them only in September," explained Avidan Califa, the head of the school's parents' committee. "We won't be sending our kids to school until a solution is found or calm is restored. The State has yet to come to its senses and hasn't eradicated the rocket fire," he said. High school and middle school students have already begun their summer vacation. Netivot resident Ya'arit Trabelsi, whose children attend Ma'agalim, said "we have no choice but to stay at home with them. It's better this way because we have a fortified room at home. It's dangerous to send them to an unfortified school, particularly after a Grad rocket fell close by in the previous round of violence. "Those who live in the south know that it's problematic to send our kids to school. They are very afraid," she said. Some 50 rockets were fired towards Israel since the latest round of violence began on Monday.