Escalation in south: The IDF struck a terror cell in Gaza Saturday afternoon, killing one person and wounding at least six others, medical sources in the Strip said.

A motorcyclist traveling in the western section of Gaza City was hit in the strike, Palestinian sources said. According to local reports, buildings in the area sustained serious damage.

IDF: Response to Gaza rocket fire too restrained PM: Militant Islam will be defeated by end of century

The IDF Spokesman's Office said the strike thwarted a rocket attack on southern Israel. According to the army, the Air Force hit a terror cell as it was making final preparations for launching rockets.

"If the last rounds were not enough to deliver the message ... we are ready to crush the enemy and to curb its arrogance and to respond to aggression in a strong way," the group military wing, Izz al-Din al-Qassam Brigades, said in a statement released Saturday afternoon. 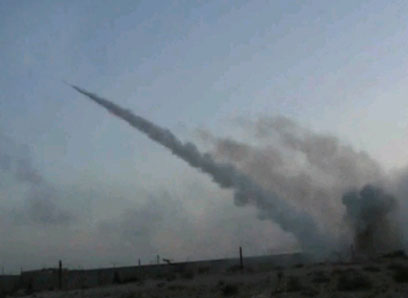 Earlier Saturday, the Palestinian reported that the Air Force struck a target in the Strip, east of Khan Younis. A 6-year-old boy was reportedly killed and three others were said to be wounded.

IDF officials denied that report, saying the army launched no such strike.

Overnight, Israeli aircraft attacked three Hamas bases in the Strip. Palestinian medical officials reported that 20 people were injured. Meanwhile, rocket attacks on southern Israel continued Saturday, with more than 20 rocket and mortar shells landing in the area during the day.

One man sustained serious wounds in the attacks, but his condition improved following treatment. The victim, Vladimir Visilitsky, 52, was wounded when a Qassam rocket fired from the Gaza Strip hit a factory in Sha'ar Hanegev. He later told Ynet: "I heard the alert, I ran to a safe area with people from my department and I was hit in the neck by shrapnel. Now I'm waiting for a major operation."

"From six in the morning, when I got to work, there were a number of alerts and I heard several explosions and also saw 'Iron Dome' in action, but the explosion that hit us was really big and scary. I hope that this situation is resolved in the end, because it's very hard to work under (such) threats," he said.

Elior Levy, AP and Neri Brener contributed to the story